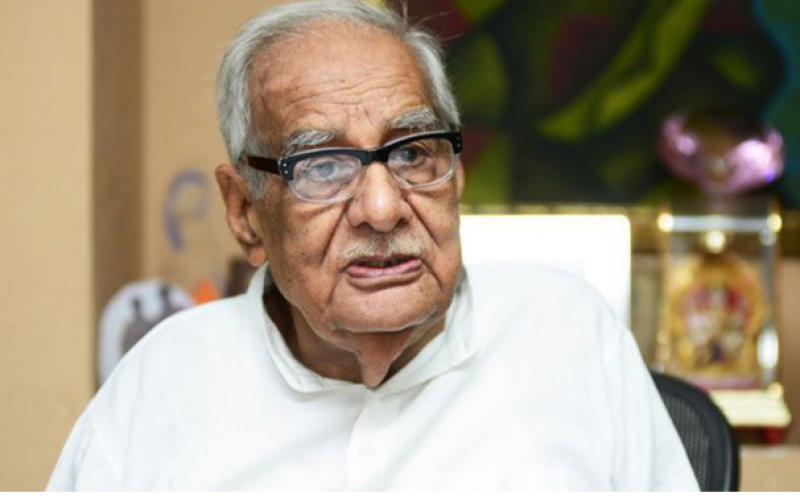 New Delhi (Agencies): Veteran Indian journalist, author and human rights activist Kuldeep Nayar passed away at around 12.30 am at a private hospital in New Delhi on Thursday following a brief illness.

Nayar, 95, is survived by his wife and two sons. His last rites will be performed today at the Lodhi crematorium in New Delhi.

A columnist, human right activist, author and ex-High commissioner of India to the United kingdom, he was an inspiration for generations, and a mentor to many reporters and editors over the years. Nayar was among the first journalists to be jailed during the Emergency. He was known for his uncompromising journalism and was a true conscience-keeper through his writings.

He was born in Sialkot, Punjab, British India on August 14, 1923. He was also nominated as a Member of the Upper House of the Indian Parliament in 1997.

Nayar also supported the movement of Anna Hazare. He authored 15 books, including Beyond the Lines, Distant Neighbours: A Tale of the Subcontinent, India after Nehru, Wall at Wagah, India-Pakistan Relationship, The Judgement, The Martyr, Scoop and India House.

Indian Prime Minister Narendra Modi has called him an “intellectual giant” and “frank and fearless.”

Kuldip Nayar was an intellectual giant of our times. Frank and fearless in his views, his work spanned across many decades. His strong stand against the Emergency, public service and commitment to a better India will always be remembered. Saddened by his demise. My condolences.

In his message, Pakistan’s Federal Information Minister Fawad Chaudhry said the journalistic services of Kuldip Nayar to promote peace will always be remembered.

Editors Guild of India offers its condolences on the death of Kuldip Nayar, one of the doyens of Indian journalism and a founder member of the Guild - https://t.co/xrPM0vb2jK pic.twitter.com/RfgkiU8Fsx

Meanwhile, politicians, journalists and other notables on both sides of the border expressed grief and remembered the champion of democratic rights.

He asked me sometime back pls come to India we need to discuss a new peace strategy I promised but Kuldip Nayar Ji gone today forever we participated in many conferences and TV discussions together in last 2 decades we last met in Dhaka in Daily Star office pic.twitter.com/uXZ453l2V3

The first journalist who interviewed A. Q. Khan is no more. Kuldip Nayar, an outstanding journalist who had always written on peace between Pakistan and India and played his role as a peace lover.

My condolences on the sad demise of veteran journalist & former Rajya Sabha member, Kuldip Nayar ji. I had met him a few months back, he was full of energy and humor. Nayar ji's firm stand against Emergency can never be forgotten. His passing away is a loss to India’s journalism. pic.twitter.com/G0wCk2nsNZ

RIP Kuldip Nayar, India’s first reporter to become editor in an era when top newsroom jobs were reserved for editorialists. A genuine scoop-man, and Ind-Pak peace visionary. You will be missed by journalists and peace activists

Rest in peace Kuldip Nayar, giant of our profession and witness to history.

When I was a young journalist he was always encouraging and kind.He fought the Emergency & devoted his life to standing up for liberal values

Whole generations of journos looked up to him.

Champion of our democratic rights, civil liberties and at the forefront of those battles, Kuldip Nayar served India with distinction. His advocacy of people to people ties with Pakistan was special. His presence in current battles would have been a source of strength. Condolences pic.twitter.com/6FbLc5NNdP

Sorry to hear of Kuldip Nayar's passing. As I wrote here, he was a journalist who followed the dictates of his conscience rather than the lure of money or fame:https://t.co/zn8AL2sSx3

‘Had warned “neutrals” if conspiracy against PTI govt succeeded, fragile economic recovery would go into a tailspin’

A journalist and editor who was an inspiration to several generations, who was committed to peace and democracy, who resisted all forms of authoritarian tendencies, and challenged the sword with the pen, Kuldip Nayar is no more.. RIP

RIP Kuldip Nayar, India’s first reporter to become editor in an era when top newsroom jobs were reserved for editorialists. A genuine scoop-man, and Ind-Pak peace visionary. You will be missed by journalists and peace activists

Pakistan likely to get additional $2.5b ADB funding for next fiscal year

Sad to hear this news. His name remains synonymous with the quest for peace between India and Pakistan, and our struggles for democracy #RIP #KuldipNayar https://t.co/tJRi6HoWb9