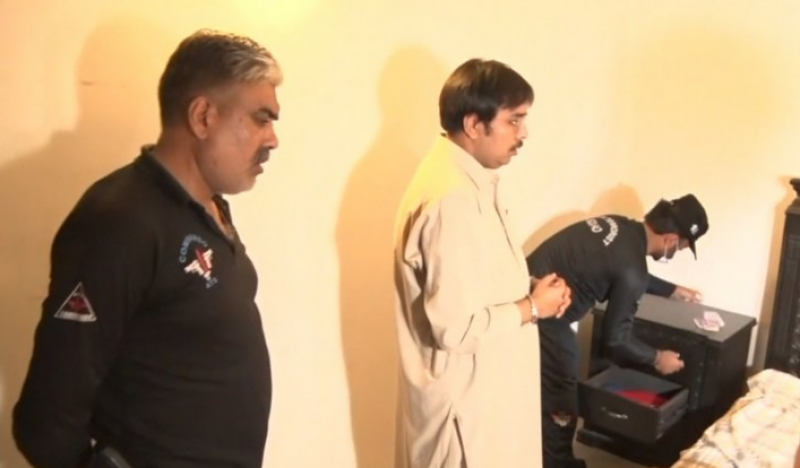 According to details, a team led by senior superintendent of police (SSP) conducted the raid late on Monday night to recover the script Gill read during a TV programme.

The raid was conducted in the presence Gill was also taken to the room in handcuffs during the police raid.

A pistol, two CNICs, USBs, his wallet and red diary were also seized during the raid. however, the incarcerated PTI leader refused to take ownership of the weapon.

Speaking to newsmen, Gill suspected that someone had visited his room during his incarceration as there were changes in it.

He said that he had no clue as to why his wallet was found in the room as my driver used to keep it. Gill also said that the place of his passports was also changed.

Police asked him about the pistol and red diary recovered from his room. “I don’t know about them,” he replied and disowned the both things.

Police said that a case of the pistol will be registered against the PTI leader.

Shahbaz Gill confirmed to media that he was sexually abused during the custody as it was being claimed by PTI chief Imran Khan.

As per the sources, Gill's Parliament lodges room is allotted to Senator Abdul Qadir.

Later, Gill was taken to his room in the Punjab House However, police found nothing from the room.

Earlier, a sessions and district court granted physical remand of Shahbaz Gill in a sedition case filed against him, after reviewing his medical report.

Gill was presented before the court earlier shortly after being discharged from the Pakistan Institute of Medical Sciences (PIMS).

PTI chairman Imran Khan's chief of staff Shahbaz Gill was arrested on August 9 from Banigala Chowk over charges of inciting mutiny among public against the ranks and files of Pakistan Army by making some remarks during a TV programme.