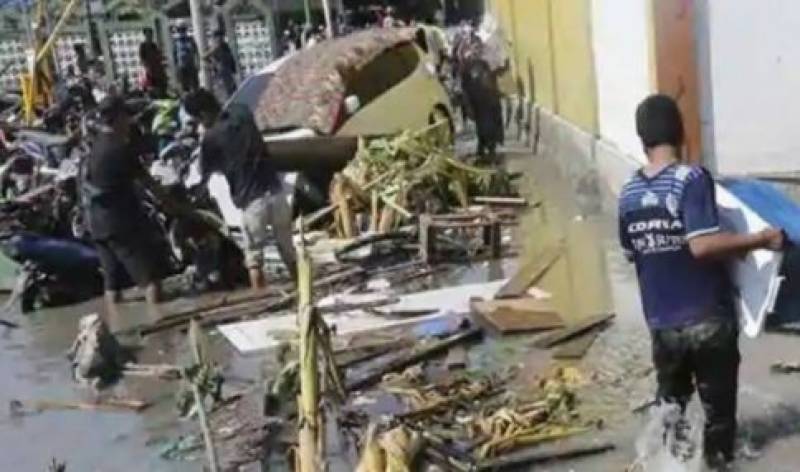 Jakarta (Agencies): At least 168 people have been killed and another 745 injured after a tsunami following a volcanic hit the coastline of west Java and Sumatra, Indonesia on Saturday.

Hundreds of buildings were destroyed by the wave, which hit the coast of southern Sumatra and the western tip of Java about 9:30 pm (1430 GMT) following the eruption of a volcano known as the "child" of the legendary Krakatoa, national disaster agency spokesman Sutopo Purwo Nugroho said.

Search and rescue teams were scouring rubble for survivors, with 168 confirmed dead, 745 people injured and 30 reported missing across three regions, he said.

Dramatic video posted on social media showed a wall of water suddenly crashing into an open-air concert by pop group "Seventeen" -- hurling band members off the stage and then flooding into the audience.

Images of the aftermath of the tsunami in coastal areas showed a trail of uprooted trees and debris strewn across beaches. A tangled mess of corrugated steel roofing, timber and rubble was dragged inland at Carita beach, a popular day-tripping spot on the west coast of Java.

Asep Perangkat, who fled Carita beach Saturday night, said he was with his family when the wave surged through the town, carving a path of destruction.

"Cars were dragged about 10 metres and so were containers," Perangkat said.

"Buildings on the edge of the beach were destroyed, trees and electric poles fell to the ground.

"All the residents that are safe ran to the forest," he said.

In Lampung province, on the other side of the strait, Lutfi Al Rasyid said he fled the beach in Kalianda city in fear for his life.