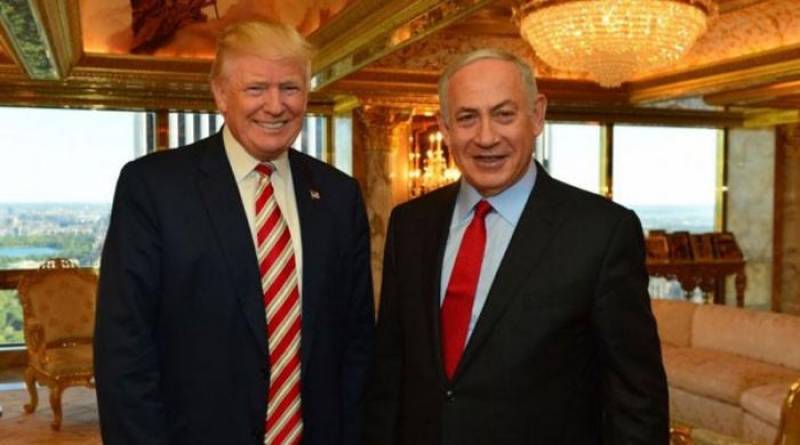 Washington (Reuters): Israeli Prime Minister Benjamin Netanyahu received an invitation from President Donald Trump to visit Washington in early February during a phone call in which they discussed the importance of strengthening the US-Israeli relationship, the White House said on Sunday.

Trump stressed his "unprecedented commitment to Israel's security" in his first call with Netanyahu since taking office on Friday.

The White House said in a statement, "The president and the prime minister agreed to continue to closely consult on a range of regional issues, including addressing the threats posed by Iran."

Trump also said peace between Israel and the Palestinians could only be negotiated between the two parties, but that the United States would work with Israel to achieve that goal.

Relations between Israel and the Obama administration ended on a contentious note, when the United States declined to veto a UN Security Council resolution calling for a halt to Israeli settlement-building.

The readout from the White House did not include any mention of moving the US embassy in Israel to Jerusalem from Tel Aviv, an action that would likely spark anger in the Arab world.

The White House said earlier on Sunday, it was only in the early stages of talks to fulfill Trump's campaign pledge to relocate the embassy.

White House spokesman Sean Spicer said in a statement, "We are at the very beginning stages of even discussing this subject." Aides said no announcement of an embassy move was imminent.

Washington's embassy is in Tel Aviv, as are most foreign diplomatic posts. Israel calls Jerusalem its eternal capital, but Palestinians also lay claim to the city as part of an eventual Palestinian state. Both sides cite biblical, historical and political claims.

Any decision to break with the status quo is likely to prompt protests from US allies in the Middle East such as Saudi Arabia, Jordan and Egypt. Washington relies on those countries for help in fighting the Islamic State militant group, which the new US president has said is a priority.

The US Congress passed a law in 1995 describing Jerusalem as the capital of Israel and saying it should not be divided, but successive Republican and Democratic presidents have used their foreign policy powers to maintain the embassy in Tel Aviv and to back negotiations between Israel and the Palestinians on the status of Jerusalem.

In early December, then-President Barack Obama renewed the presidential waiver on an embassy move until the beginning of June. It is unclear whether Trump would be able to legally override it and go ahead with relocation of the embassy.

US diplomats say that, despite the US legislation, Washington's foreign policy is in practice broadly aligned with that of the United Nations and other major powers, which do not view Jerusalem as Israel's capital and do not recognize Israel's annexation of Arab East Jerusalem after its capture in the 1967 Middle East war.

Israel approved building permits on Sunday for hundreds of homes in three East Jerusalem settlements in expectation that Trump will row back on the previous administration's criticism of such projects.