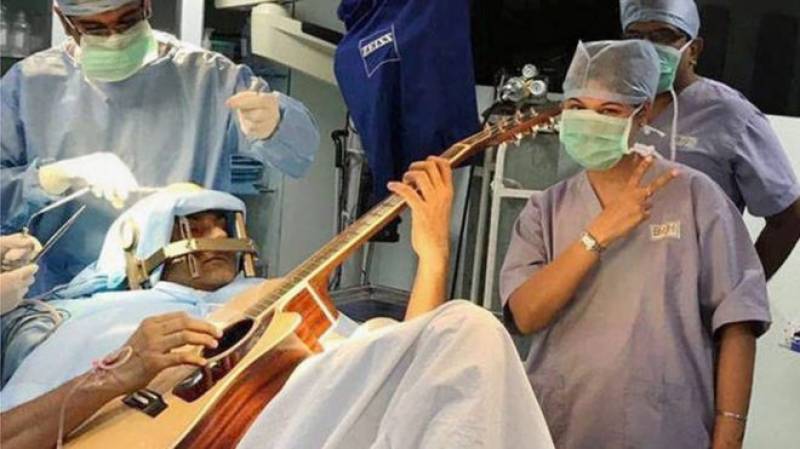 Abhishek Prasad was asked to play every time doctors "burnt" a circuit in his brain to treat what is commonly known as "musician's dystonia".

Mr Prasad told the BBC that he was able to play with ease after the surgery.

"By the sixth burn, my fingers opened up. I was normal on the operating table itself," Mr Prasad said after doctors removed the stitches on his head on Thursday, a week after his operation in the southern Indian city of Bangalore.

Dystonia had prevented Mr Prasad from moving his middle, ring and little finger of his left hand when he played the guitar.

"I thought the stiffness was because of over practice. I took a break and tried again and realised that there was no respite from the stiffness. Some doctors told me it was muscle fatigue and I was given painkillers, multi-vitamins, antibiotics, physiotherapy etc," he said.

He added that spasms in his fingers occurred only when he played the guitar.

But a neurologist correctly diagnosed nine months ago that he was suffering from dystonia.

"I was advised to undergo brain surgery, but I got scared. But my doctor, Sharan Srinivasan, gave me the confidence to do it," he said.

The musician said he vividly remembered every detail of the procedure.

He said the doctors fixed a frame with four screws on his head to cut open his skull before conducting an MRI scan.

"The scan helped in assessing how deep the electrodes could be inserted to correct the circuits inside the brain."

Mr Prasad added that he felt "like a generator was on during the operation", but felt "no pain".

Dr Srinivasan explained that "the patient does not feel pain because the operation was done under local anaesthesia".

He added that he made a 14mm hole and inserted a specialised electrode into the skull and the "target areas were 8 to 9cms deep inside the brain".

"He was fully awake all through, and the result was available on the operating table because his fingers had started moving normally on the guitar," he explained.