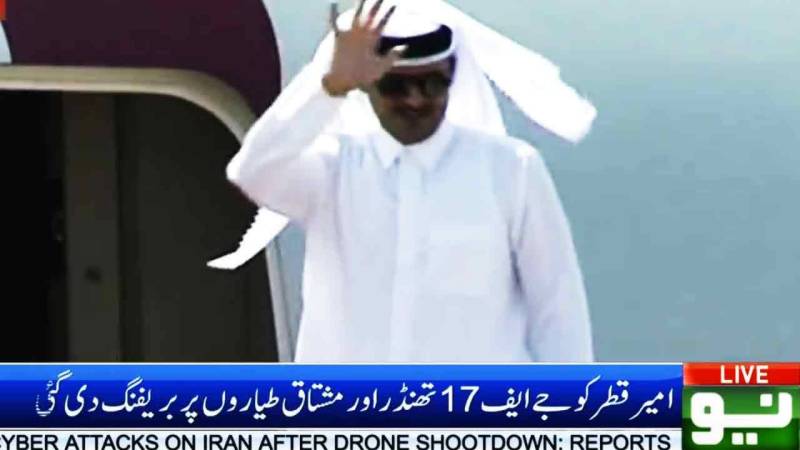 Islamabad (Web Desk): Emir of Qatar Sheikh Tamim bin Hamad Al Thani left for his country on Sunday after the conclusion of his two-day official visit to Pakistan.

Special Assistant to PM on Overseas Pakistanis Syed Zulfiqar Abbas Bukhari and other high civil and military officials saw off the Qatri Emir and his delegation at the Nur Khan airbase.

The visiting dignitary was awarded the highest civil award of Pakistan during a ceremony held at the President House in Islamabad.

The event was attended by senior members of the government, parliament, bureaucracy and armed forces and members of Qatari delegation.

The Emir of Qatar arrived in Islamabad on two-day visit to Pakistan on Saturday.

The dignitary was accorded a red carpet reception with Prime Minister Imran Khan personally receiving him warmly at the Nur Khan Airbase.

The plane carrying the Emir had flags of both Pakistan and Qatar installed on it, reflecting the importance Qatar gives to its relations with Pakistan.

The distinguished guest was given a 21-gun salute. Two children presented bouquets to the guest. A JF-17 squadron of PAF saluted the guest in a magnificent fly past.

The Emir of Qatar inspected the Guard of Honor. National anthems of the two countries were also played on the occasion.

Prime Minister introduced the distinguished guest with members of cabinet and the federal ministers.

The Qatari Emir was accompanied by a high-level delegation comprising key ministers and senior officials.

Sheikh Tamim bin Hamad Al Thani planted a sapling at the lawn of Prime Minister House as per tradition.

During a ceremony, Pakistan and Qatar signed three MoUs for cooperation in the fields of trade, investment, tourism and financial intelligence.

The third MoU relates to cooperation in the field of exchange of financial intelligence, anti-money laundering and to check terror financing.