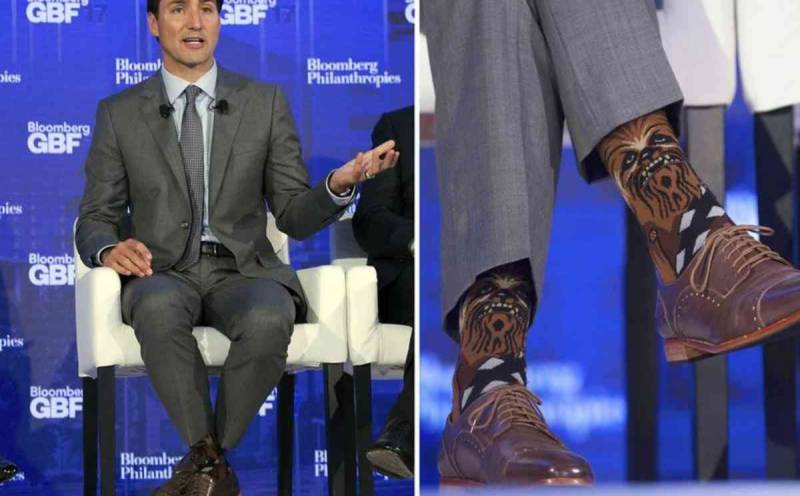 Star Wars actor Mark Hamill applauded the appearance of his Wookie comrade on Trudeau’s socks, tweeting on Thursday it was “another reason” he loves the prime minister.

Here's another reason I ❤️ @JustinTrudeau Plus-I have it on good authority exactly what he was wearing UNDER his suit. #GreatWhiteNorthNerd pic.twitter.com/7LjaQN82l8

But Canadian actor William Shatner, who starred in the rival Star Trek franchise, suggested his feelings were hurt by the sock choice, tweeting a tearful emoji and message: “@JustinTrudeau I thought we were friends? Chewbacca socks?”

@JustinTrudeau I thought we were friends? ???? Chewbacca socks? ???? pic.twitter.com/CK6U9hGWkv Trudeau is a well-known fan of Star Wars, having dressed as Han Solo - with his wife Sophie Gregoire Trudeau as Princess Leia - in 2015 to trick-or-treat on Halloween with his children.

Hamill joked that Trudeau also wears Star Wars-themed underclothes, tweeting that “Plus-I have it on good authority exactly what he was wearing UNDER his suit” along with a photo of Luke Skywalker children’s underwear. Trudeau tweeted a reply on Friday: “Thanks Mark. Sadly those haven’t fit in a while...” along with a “may the force be with you” Star Wars hashtag.

Thanks Mark. Sadly those haven't fit in a while... #MTFBWY https://t.co/J1DMyNLUoR

The Prime Minister’s office declined to comment on whether Trudeau’s sock choice was causing friction between Star Wars and Star Trek fans.

Trudeau’s penchant for wearing novelty socks to fit many occasions, including socks celebrating gay pride, NATO, and the Eid Islamic festival, has garnered both attention and disdain. A New York Times story in June speculated the “sock diplomacy” symbolized Trudeau’s refusal to be bound by antiquated mores.