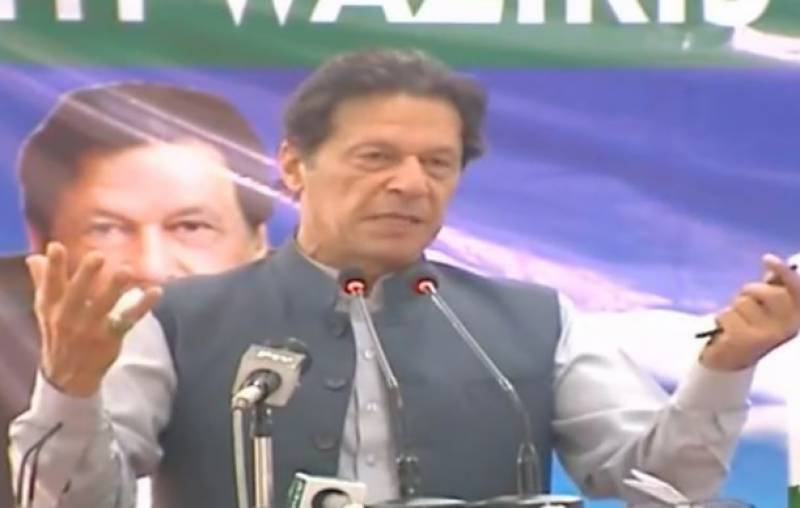 South Waziristan (Agencies): Prime Minister Imran Khan has said that Pakistan Tehreek-e-Insaf (PTI) government is trying its best to provide justice and basic amenities of life to all people of the society on the pattern of Islamic Welfare State of Medina.

Addressing tribal elders at Spinkai Raghzai on Wednesday, the prime minister said that Rs100 billion will be spent on uplift of tribal districts annually.

The PM said that PTI government was taking steps for the development of all backward areas in the country.

Imran Khan said that the government was giving priority to development of tribal districts despite financial crisis. “Our revenue is Rs4500 billion out of which Rs 2000 billion rupees are being paid as interest on foreign debts”, the PM said.

“People will witness real change in the holy month of Ramazan as more funds will be released for public welfare”, he said.

The PM assured that health and education facilities will be enhanced in tribal areas. He announced all the tribal people will be provided Sehat Insaf Card whereby every family will be allowed to spend Rs720, 000 on their treatment.

“Special quota will be fixed in jobs for tribal youth. Interest free loan will also be provided to tribal youth for starting their own business”, Khan said.

The prime minister said that small dams will be constructed to provide clean drinking water to people of Waziristan.

Later, addressing a public gathering at Wana, Prime Minister Imran Khan once again reaffirmed his commitment to recover the national looted wealth from corrupt elements. He said accountability of corrupt politicians will be completed and no NRO will be given to them.

Imran Khan said that tribal people are true patriots and they have rendered great sacrifices for the nation. He said survey is in progress to assess damages suffered by the tribal people due to terrorism.

Pak Army soldier martyred in exchange of fire with terrorists in ...