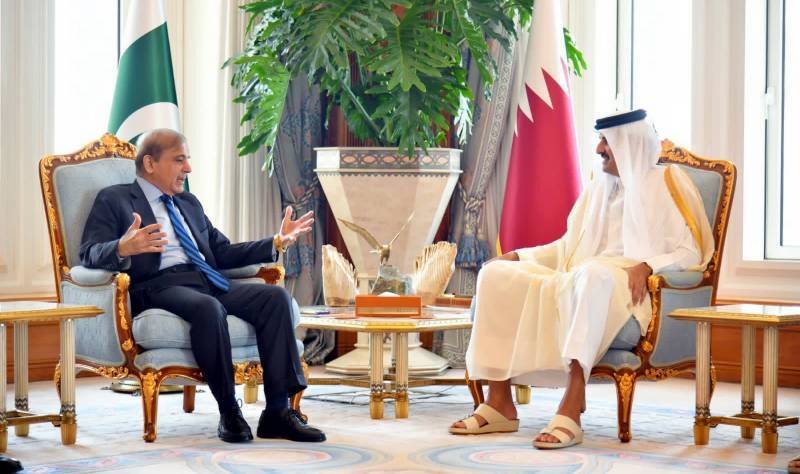 This was agreed in a meeting between Prime Minister Shehbaz Sharif and Emir of Qatar Sheikh Tamim Bin Hamad Al Thani held at Diwan-e-Amiri in Doha, the Radio Pakistan reported.

The two sides also discussed matters pertaining to bilateral and mutual interest during the meeting.

Earlier, as the premier arrived at Diwan, he was warmly welcomed by the Emir at the main entrance.

The Amiri guards also presented a guard of honor to the prime minister before proceeding to hold the meeting and the delegation-level talks.

The premier underscored the importance Pakistan attached to its longstanding and cordial relationship with Qatar, which is based on firm foundations of mutual trust and abiding support.

Recalling the earlier visits of the Emir's father to Pakistan in 1999 and 2017, the PM Shehbaz appreciated the role played by His Highness in elevating the relationship between the two countries and acknowledged the robust relationship developed during his  reign.

Recalling 'Education Above All' programme under the patronage of Her Highness Sheikha Moza bint Nasser, the premier lauded her humanitarian and charitable efforts, in particular enrolment of out-of-school children around the world including Pakistan.

He thanked the Emir's father for hosting more than 200,000 Pakistani diaspora in Qatar, which is contributing to the progress of the State of Qatar, as well as Pakistan. He assured His Highness of further cooperation with the country in line with Qatar's Vision 2030.

The Prime Minister also extended a cordial invitation to the Father and Mother of the Emir to visit Pakistan at the earliest.

Prime Minister Shehbaz Sharif is in Doha on a two-day official visit to Qatar on the invitation of Emir of state of Qatar Sheikh Tamim bin Hamad Al Thani.

This is PM Shehbaz Sharif's first visit to Qatar since assuming office in April 2022.

Qatar is home to more than 200,000 Pakistanis, who are contributing to the progress, prosperity and economic development of the two brotherly countries.