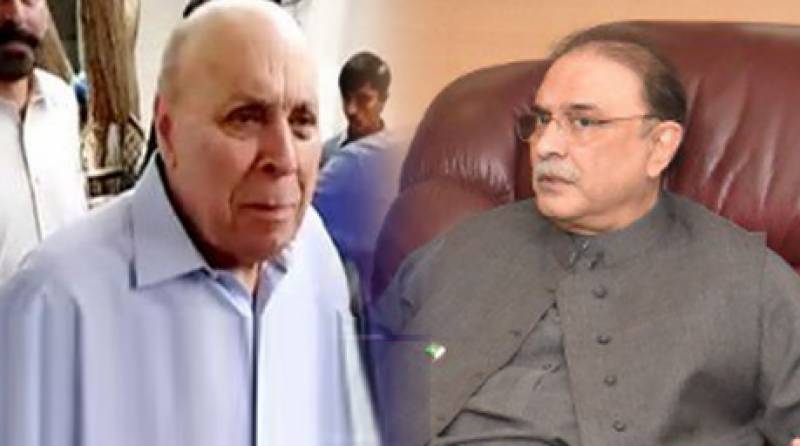 A two-judge bench headed by Chief Justice of Pakistan Justice Mian Saqib Nisar and comprising and Justice Ijazul Ahsan heard the suo motu case at the SC's Lahore registry and banned the trading and transfers of the properties of the Zardari Group, Bahria Town and Omni Group which are mentioned in a report submitted by the JIT — probing the fake bank accounts case.

As the hearing started, Chief Justice Nisar ordered that the summary of the JIT report be shown on a projector in the courtroom.

The chief justice berated the Omni Group owners, including Anwar Majeed who is one of the co-accused in the case.

"It seems that the haughtiness of Omni Group's owners has not diminished," Justice Nisar remarked. "[They have] embezzled the nation's billions and are still misbehaving."

“It seems that they will have to be shifted elsewhere from Adiala jail.” Justice Nisar said and added, “There will be no mercy for Anwar Majid.”

The Federal Investigation Agency (FIA), whose JIT had compiled the report, asked the court to put the names of all the accused on the Exit Control List (ECL).

The chief justice told the FIA official to approach the interior ministry, saying that "they will take a decision regarding the ECL".

The chief justice directed the JIT's report to be forwarded to all the accused, and instructed Zardari's counsel to submit his reply on the report.

The PPP leader and his sister appeared before the banking court after their interim bail ended today.

Pakistan Peoples Party (PPP) senior party leaders, including Khursheed Shah and Rehman Malik were also present on this occasion while a large number of party workers had gathered outside the court premises.

The JIT that has been investigating the fake accounts recommended a legal course against some 415 key individuals and around 172 entities allegedly involved in transactions of approximately Rs220 billion through 104 fake accounts.

The JIT observed that either the investigation would be further referred to banking courts, NAB, FIA or it was up to the apex court to decide based on the JIT findings. In a series of events in the fake accounts investigation, the JIT report also revealed a domestic worker of Zardari, with an estimated fortune of around Rs8.1 billion stashed into one of his fake accounts. Mushtaq Ahmed, 37, who once served as one of personal staff members of Zardari accumulated the wealth with Zain Malik through a joint fake account maintained in a private bank in Karachi during 2014-15, the report stated.

This is pertinent to mention that the Federal Investigation Agency (FIA) is investigating 32 people, including Asif Ali Zardari and his sister Faryal Talpur in connection with money laundering from fake accounts.

Former president's other close aide and Omni Group chairman Anwar Majeed and his son, Abdul Ghani, were also arrested by FIA earlier this month whereas Majeed’s three other sons were granted interim bail.