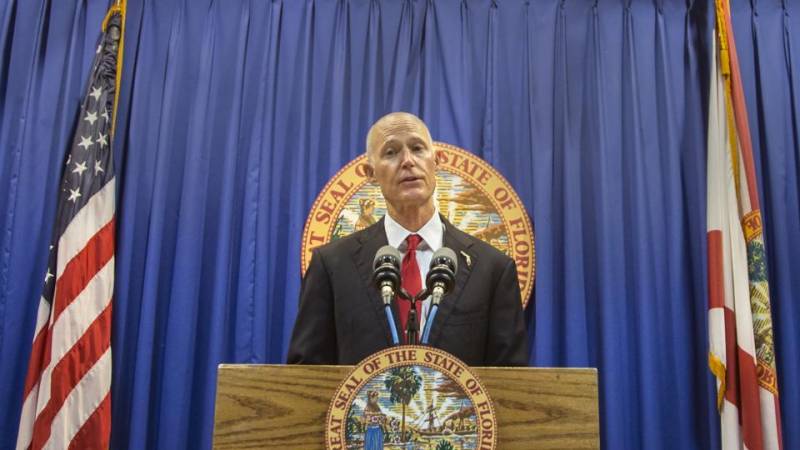 Parkland (Reuters): Florida Governor Rick Scott, a loyal ally of the US gun lobby under mounting pressure to act in the aftermath of last week’s deadly mass shooting, urged state lawmakers on Friday to tighten access to firearms for young people and the mentally disturbed.

Scott said he would work with the Republican-controlled legislature over the next two weeks to raise the minimum legal age for buying any gun in Florida from 18 to 21, with some exceptions for younger individuals serving in the military or law enforcement.

That proposal put the Republican governor at odds with the National Rifle Association (NRA), which has opposed higher age limits in Florida, where a person must be at least 21 to buy a handgun but can be as young as 18 to purchase an assault rifle.

But Scott, who has been endorsed by the NRA and received its highest rating for supporting the rights of gun owners, said he opposed an outright ban on assault rifles, as some gun control advocates have demanded.

He also backed adoption of a law, like those enacted in a handful of other states, allowing police and family members to obtain restraining orders to bar people suspected of posing a threat of violence from possessing guns.

Broward County Sheriff Scott Israel, who is leading the investigation of the Feb. 14 shooting rampage at Marjory Stoneman Douglas High School, welcomed Scott’s plan as a “strong first step in giving us the proactive ability to keep Florida safer.”

But critics of the plan, which closely mirrored proposed measures unveiled on Friday by leaders of the state legislature, said it failed to go far enough.

“He is doing the bare minimum,” said US Senator Bill Nelson, a Florida Democrat widely expected to face a re-election challenge this year from Scott.

The 17 people slain in the Fort Lauderdale suburb of Parkland were shot with a semiautomatic AR-15-style assault weapon, which authorities say was purchased legally last year by the accused gunman, Nikolas Cruz, when he was 18 years of age.

Cruz, now 19, a former Stoneman Douglas student who authorities said had a history of run-ins with the law and was expelled from school for disciplinary problems, has been charged with 17 counts of premeditated murder.

The Federal Bureau of Investigation (FBI) and the Broward County Sheriff’s Office have since acknowledged receiving several tips over the past two years from callers saying they had reason to believe Cruz was inclined to commit a school shooting.

In one of those tips, an unidentified caller warned the FBI about the gunman’s possible intentions a month before the shooting, the Wall Street Journal reported.

“He’s going to explode,” the woman, who was close to Cruz, told to a tip line operator on Jan. 5, according to a transcript reviewed by the Journal.

In addition to age limits, Scott said he wanted to change state laws to make it “virtually impossible for anyone who has mental issues to use a gun,” echoing similar calls by US President Donald Trump.

The governor called in particular for a new program allowing a family member, police officer or community welfare expert to seek a special court order barring the purchase or possession of a firearm by anyone shown to pose a safety threat due to mental illness or violent behavior.