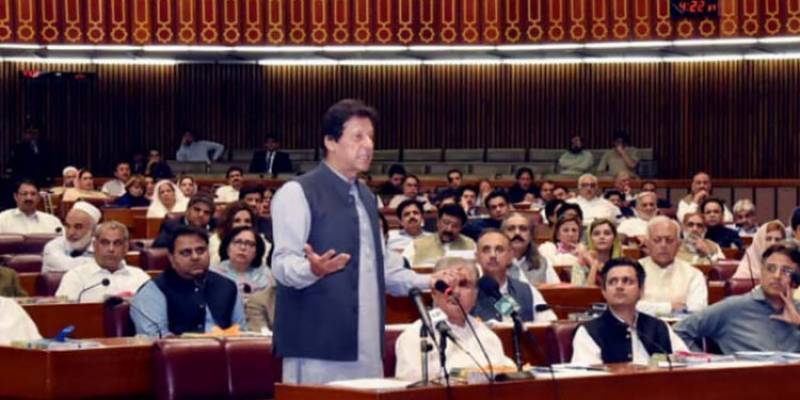 According to sources, the NA speaker had approved the resignations a few days ago and has sent a summary to the Election Commission of Pakistan (ECP).

After approval of these resignations, only dissident PTI lawmakers will remain in the National Assembly.

Reacting to the reports, PTI leader Fawad Chaudhry on Tuesday slammed the governmetn after reports regarding acceptance of PTI MNAs resignations by the the NA speaker emerged on media.

In a tweet, the PTI leader said that the purpose of PTI lawmakers going back to the assembly was to oust Raja Riaz from the position of the opposition leader.

Otherwise, we have no reason to return to the National Assembly, Fawad said, adding that right

now, Shehbaz Sharif and his government have lost the support of 172 lawmakers.

“Now 40% of seats in the NA are empty,” he said, adding that the the only solution to this crisis is elections.

The development comes a day after 45 PTI MNAs of on Monday requested the ECP that they should not be denotified if NA Speaker Raja Pervaiz Ashraf approves their resignations.

He said that the decision was made on the direction of party chief Imran Khan after the NA Speaker Raja Pervaiz Ashraf refused to accept all the resignations together and informed that an email in this regard has been sent to the speaker.

“The next step would be to get PTI’s lawmaker appointed as the Opposition Leader in the National Assembly,” Asad added.

Later in the day, party lawmakers also held a meeting with the top brass of the ECP in Islamabad.

Talking to reporters outside the ECP, PTI leader Amir Dogar said the party had provided the commission with a list carrying the names of 45 MNAs who had withdrawn their resignations.

After the acceptance of 80 resignations since July, the strength of PTI MNAs in the assembly has shrunk to 73 including the dissidents.

It is pertinent to mention that around 131 PTI MNAs tendered their resignations en masse after Imran Khan's government was ousted through a no-confidence motion in April 2022.

On July 28, 2022, the NA speaker had accepted the resignations of only 11 PTI lawmakers.