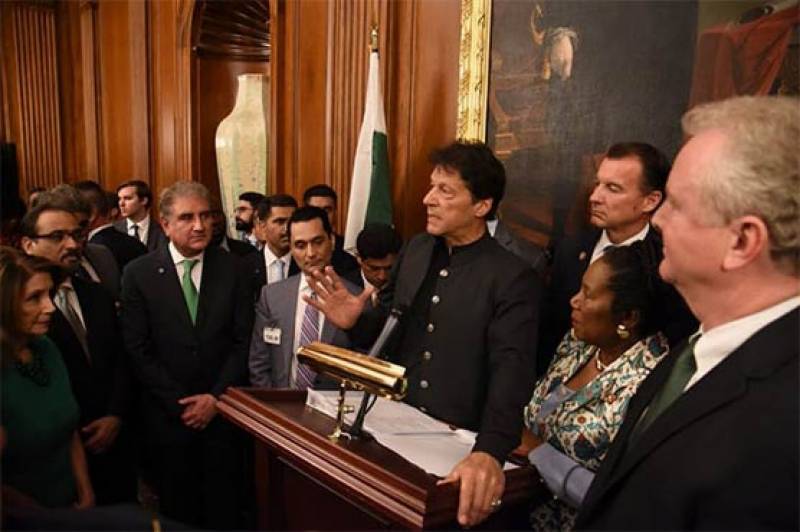 Washington (Web Desk): Prime Minister Imran Khan on Tuesday said that the "whole idea" of his visit to the United States (US) was for Americans to have a better understanding of Pakistan.

Addressing the members of the US Congressmen at the Capitol Hill, the prime minister said Pakistan had always close ties with the US and expressed the hope to get back to the relationship, which was based on truth and trust as well as mutual respect.

Imran Khan said unfortunately, he felt that Pakistan was not understood there, specifically in the last 15 year when the war on terror was being fought in Afghanistan and on the border of Pakistan.

The PM said that more than 70,000 Pakistani people died and our economy suffered billions of dollars loss in the war against terror.

“Pakistan was fighting the US war of terror as Pakistan had nothing to do with the 9/11, Al Qaida was in Afghanistan and there were no militant Taliban in Pakistan,” he added.

He said it was very important that he met President Donald Trump and Secretary of State Mike Pompeo, and explained to them the way forward that the relationship has to be based on mutual trust.

PM Imran said Pakistan is trying its best to bring Taliban to the negotiation table and significant achievement has been made so far in this regard.

"Pakistan has the same objective as the United States of reaching a peaceful solution in Afghanistan as quickly as possible."

He acknowledged that this would not be easy but assured the attendees that Pakistan would try its best.

Earlier, US Congress Speaker Nancy Pelosi, other members and Co-Chair of Pakistan-US Caucus welcomed and warmly received the prime minister at the Capitol Hill.

They appreciated the role Pakistan was playing especially in the Afghan peace process.

She thanked the premier for his leadership with regards to reconciliation efforts between Pakistan, Afghanistan and the Taliban, and for advancing "enduring peace in the region".

The premier thanked Pelosi for extending the invitation and for giving him a chance to share Pakistan's point of view.

"So far, I feel that Pakistan has not really been represented properly in the US. I feel that it is time to have a different sort of relationship with the US — a reset," he said.

Later, Prime Minister Imran Khan left for Pakistan after completing his successful visit to the US.