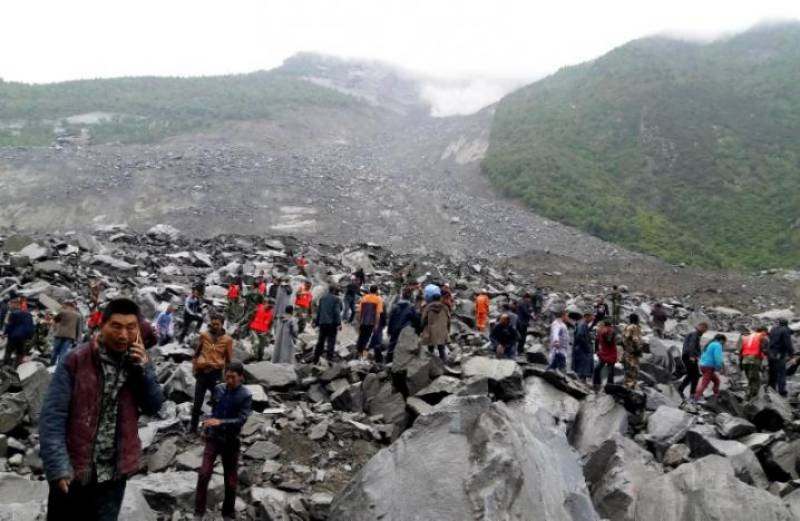 Beijing (Reuters): Fifteen people were killed in a landslide in southwest China's Sichuan Province on Saturday and about 100 were believed to be still buried in the debris and feared dead, state media said.

The landslide swept over more than 60 homes as dawn broke in Xinmo, a remote village in north Sichuan province. Rubble slid 800 meters (half a mile) down a steep slope to block a 2 km stretch of river and 1.6 km of road, official state news agency Xinhua said.

More than 1,000 workers were involved in the rescue effort, including more than a hundred medical staff.

Xinhua, quoting rescue headquarters, said 15 bodies had been retrieved from the debris by Saturday night. More than 120 people were believed to have been buried, it said. Geological experts at the site said the chances of them surviving were slim, Xinhua said.

State broadcaster CCTV reported that by midday only three people had been pulled from the rubble -- a couple and their two-month-old baby. Another child of the family remained buried.

Photos from the official People's Daily showed rescue efforts continuing after nightfall using torches, and it said rescuers were trying to reach two people they believe they had heard trapped beneath the rubble. State television reports showed villagers and rescuers scrambling over mounds of mud and rocks that had slid down the mountainside.

Television images showed water thick with mud flowing over the site, submerging a car pushed from the road, while police and residents pulled on ropes to try to dislodge large boulders.

Police have closed roads in the county to all traffic except emergency services, the news agency said. There is an extensive network of dams in the area, which is close to the region of Tibet, including two hydropower plants in Diexi town near the buried village.

Heavy rain triggered the landslide, the provincial department of land and resources said, according to Xinhua.

The area is prone to earthquakes, including one in 1933 that resulted in parts of Diexi town becoming submerged by a nearby lake, and an 8.0 magnitude tremor in central Sichuan's Wenchuan county in 2008 that killed nearly 70,000 people.