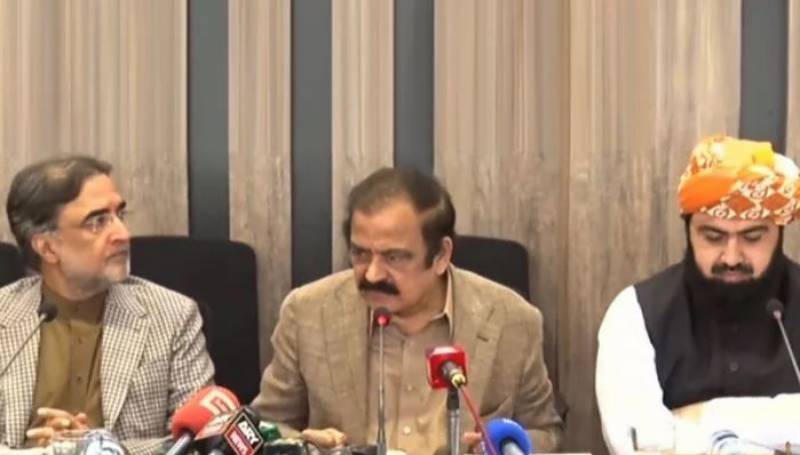 Addressing the press conference, Federal Minister for Interior Rana Sanaullah said that the government will not allow the PTI spread "chaos and disorder" in the guise of the march.

He said that the PTI chief Imran Khan will be stopped from propagating his misleading agenda against the country and the people.

"These people (PTI) have moved from abuses to bullets. A police constable was killed in Lahore."

"Don't be misled by Imran Khan. He directed his party members during rallies to call people from other parties robbers and traitors. This is how he wants to spread chaos and disorder."

"Had they not called it a bloody march and talked about spreading anarchy, we would not have stopped them.

"The interior minister vowed to protect the lives and properties of the capital's people "at all costs" and claimed that the situation would be normalised by 10pm tomorrow.

Rana Sanaullah was flanked by leaders from allied parties, including JUI-F's Maulana Abdul Ghafoor Hyderi, PPP's Qamar Zaman Kaira and Jamhoori Watan Party's Shahzain Bugti who affirmed that the decision to stop the long march had been taken through consensus.

Meanwhile, the federal government as well as the governments of Sindh and Punjab decided to impose a ban on gatherings under Section 144 (power to issue order absolute at once in urgent cases of nuisance or apprehended danger) of the Code of Criminal Procedure.

Earlier in the day, the Islamabad High Court (IHC) on Tuesday stopped the government from harassing PTI leaders and workers.

Hearing a petition filed by the PTI against the ongoing countrywide crackdown and detentions of its workers ahead of its Azadi March, IHC Chief Justice Athar Minallah remarked, “Even in a law and order situation, the rules laid down by the SC should be followed.”

In the wee hours of Tuesday, a constable was killed during police raid at a PTI's  worker in Model, Lahore.

As per details, police raided a house in Model Town C-Block on Monday night to arrest a local (PTI leader.