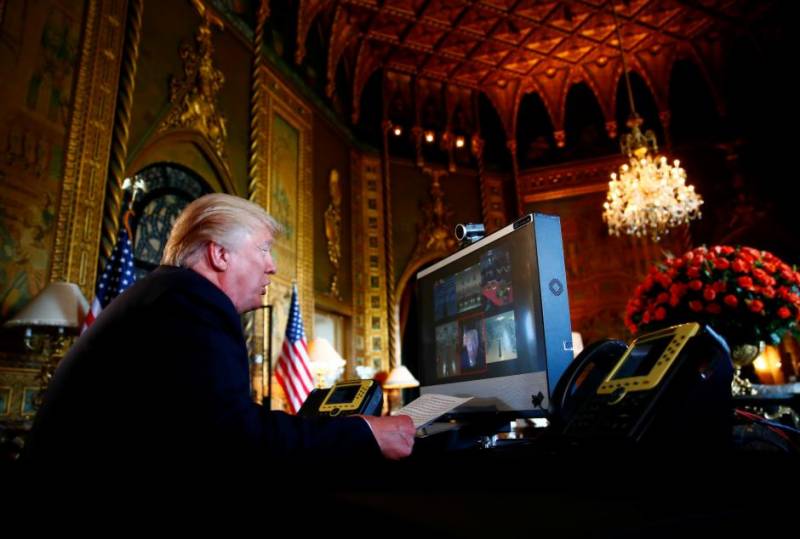 Palm Beach, Florida (Reuters): United States President Donald Trump gave a bullish Thanksgiving address to troops overseas on Thursday, hailing progress in Afghanistan and against ISIS, and telling them they were fighting for “something real,” including a stock market at record highs and his promised “big, beautiful fat tax cuts.”

Speaking in a live video teleconference from Palm Beach, Florida, with military personnel serving in Afghanistan, Iraq and elsewhere, Trump told them they were “very, very special people.”

He called troops in Afghanistan “brave, incredible fighters” who had “turned it around” in the past three to four months.

“We opened it up; we said go ahead, we’re going to fight to win,” he said. “We’re not fighting any more to just walk around, we are fighting to win.”

Trump said the Marines were inflicting “defeat after defeat” on Islamic State, and again credited his change of approach compared to that of the Obama administration.

Trump told the troops they could look forward at home to the benefits of “big, beautiful fat tax cuts,” a stock market at record highs, jobs and economic growth.

Trump took one of his trademark swipes at the news media as he spoke from a lavishly decorated room at his Mar-a-Lago resort, telling the military personnel he was addressing that journalists were in the room, and adding:

Later, Trump and his wife, Melania, handed out sandwiches and shook hands at a Coast Guard station in nearby Riviera Beach and told personnel his administration was building up wealth so it could protect the country through military acquisitions.

Talking about his plans for boosting military spending, he said contractors saved the best equipment for U.S. troops. “When we sell to other countries - you never know about an ally - an ally can turn,” he said.

Trump said he had told the troops overseas the country was “doing great,” thanks to his cuts in “regulation and all the waste and all the abuse.”

“I told them ... you folks are fighting so hard and working so hard, and it’s nice that you’re working for something that’s really starting to work.”

While optimism about a major tax overhaul has helped push the U.S. stock market up for most of this year, Trump is still seeking his first major legislative win after almost a year in office.

According to a majority of economists in a recent Reuters poll, U.S. Republicans are not expected to push the tax cuts through Congress this year. Economists are also skeptical that the legislation would provide a significant boost to the economy.