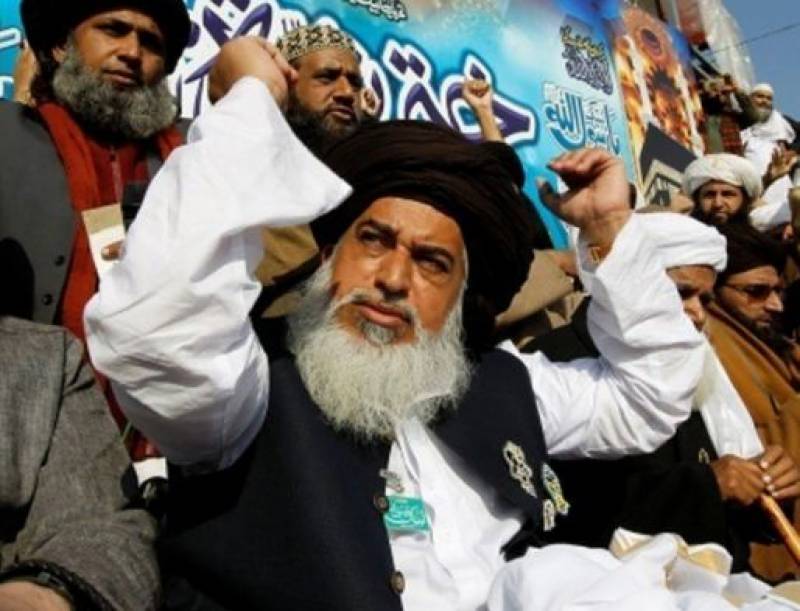 According to tweets by Federal Information Minister Fawad Chaudhry, the action was taken as Rizvi refused to withdraw his call for protest in Rawalpindi's Liaquat Bagh on November 25.

The TLP chief has been shifted to a guest house by the law enforcement authorities, the minister said.

Khadim Hussain Rizvi has been taken into protective custody by police and shifted to a guest house.They insisted to come to Rwp refusing Governments proposal for alternative arrangements

It’s to safeguard public life, property and order and has to do nothing with Asia Bibi case

"They insisted to come to Rawalpindi refusing government’s proposal for alternative arrangements. It’s to safeguard public life, property and order and has to do nothing with Asia Bibi case," he said.

Chaudhry said that the law and order situation is fully under control,however, he requested the citizens to remain peaceful and cooperate with the authorities.

"The TLP has become a threat to the life and properties of the people of Pakistan and continues to do its politics under the cover of religion," the minister said.

Fawad added that the government "did it[s] best" to convince the party against convening for the protest, "but they refused every offer and started to provoke violence".

Govt did it best to convince them but they refused every offer and started to provoke violence. Public is requested to stay peaceful n calm State is responsible to defend finality and respect of Holy Prophet PBUH. Law shall take its course and it cannot be left to individuals.

The minister said the government has requested the public to stay peaceful and calm.

He said that state is responsible to defend finality and respect of Holy Prophet (PBUH). He said the law shall take its course and it cannot be left to individuals.

Meanwhile, a crackdown has been initiated against the TLP activists and leaders in all major cities of the country, following the arrest of Khadim Hussain Rizvi.

The TLP workers staged brief protests in different cities but the law enforcement authorities dispersed the gatherings to avert any untoward situation.

On Thursday, the Supreme Court (SC) reserved verdict in a suo motu case regarding Faizabad sit-in staged by Tehreek-e-Labbaik Pakistan (TLP) in 2017.

Last year in November, the top court had taken suo motu notice of the three-week long sit-in, which was held against a change in the finality-of-Prophethood oath, termed by the government as a clerical error, when the government passed the Elections Act 2017.