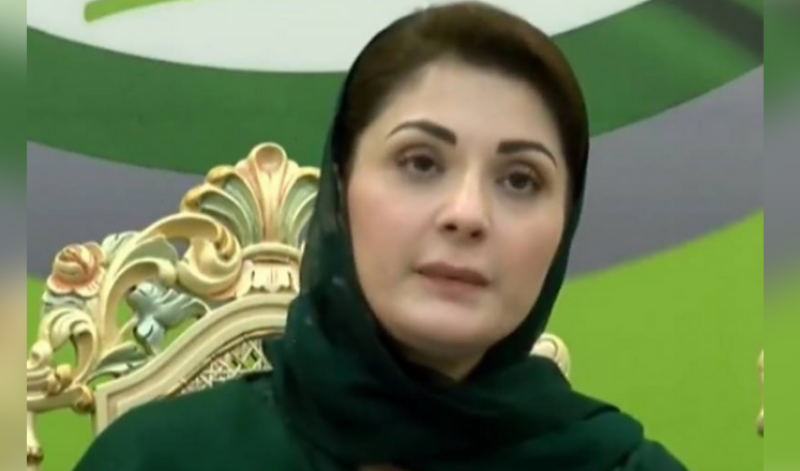 Islamabad (Web Desk): Pakistan Muslim League-Nawaz (PML-N) Vice President Maryam Nawaz on Wednesday asked former chief justice of Pakistan (CJP) Mian Saqib Nisar to come forth and tell the nation who "pressured" him and whom it was that he "could not refuse" to convict her and her father former premier Nawaz Sharif.

She was addressing a press conference in Islamabad alongside other PML-N leaders, days after an alleged audio of the former CJP was leaked.

Her remarks come three days after the emergence of an audio clip, purportedly of a conversation between Nisar and an unidentified man regarding Nawaz and Maryam trial.

Claiming that the clip of the former top judge was a confession of his ‘crime’, the opposition party leader termed it as a ‘charge-sheet against him’.

Commenting on the media coverage about the clip, she said that she will not name the media house, but one channel ‘assumed the responsibility for analysing the clip themselves.

Maryam said that previously former CJP denied any connection with the clip and after the media outlet revealed that different clips were merged from various occasions to create the one clip.

“As soon as the audio came out, propaganda regarding the clip began to prove that the clip was doctored despite the fact that a very renowned American company did the forensic analysis of the clip,” she said, adding that they have clearly stated that the clip has not been edited in any way.

She said that analysis of the TV channel prompted former top judge to confirm that it was his voice, she opined while commending the work of the private news channel as it led to his ‘admission’.

Maryam Nawaz said that the former Islamabad High Court (IHC) judge Shaukat Aziz Siddiqui was the first witness who spoke against the punishment meted out to Nawaz.

She claimed that the judge, who was sacked following the allegations against the spy agencies, had alleged that the chief of the premier spy agency visited his house and asked him to sentence Nawaz.

The PML-N leader said that accountability judge Arshad Malik was also expelled for speaking the truth, adding that the chief of the spy agency never denied allegations levelled by Justice Siddiqui.

“More than 400 Pakistanis were named in Panama Papers Leaks but no one was punished except Nawaz Sharif,” She said.

Furthermore, the PML-N leader also mentioned former top judge of GB Rana Mohammad Shamim’s affidavit saying that the court must take action on that and questioned all parties.