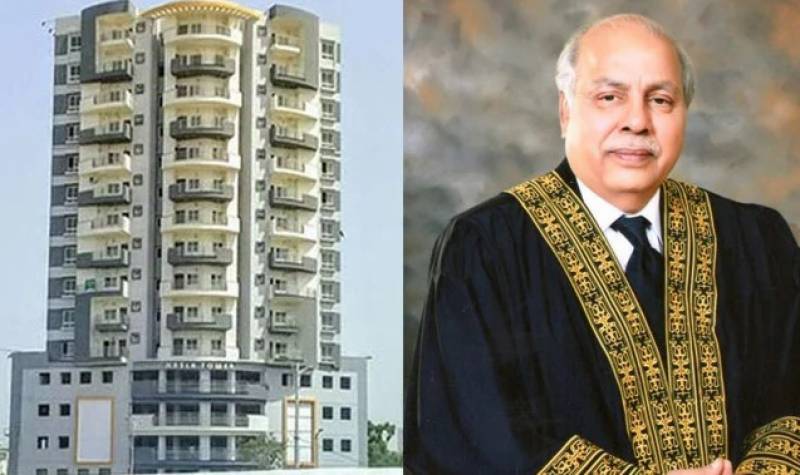 Karachi (Web Desk): Chief Justice of Pakistan (CJP) Gulzar Ahmed on Wednesday reprimanded Karachi commissioner after submission of the demolition report on Nasla Tower, and ordered to raze the building immediately and submit the report till afternoon.

According to details, a three-judge bench of the top court headed by CJP Gulzar Ahmed and comprising Justice Ijaz ul Ahsan and Justice Qazi Mohammad Amin Ahmed heard the case of a building declared to have been built on encroached land along with the Shahra-e-Faisal.

During the hearing, the court scolded the Karachi commissioner and asked him to leave his post if he is unable to perform.

The CJP then asked the advocate-general what grade the Karachi commissioner falls under.

"He is a grade-21 officer," responded the advocate-general.

"Is this the way a grade-21 officer speaks in court?" asked CJP Ahmed.

"Sir, I am trying to make you understand," stated the commissioner.

"Stop trying. You will go straight to jail from here," the CJP warned. "We are understanding but you aren't. You are only passing the time," he said.

The court ordered the commissioner to take all the available machinery and start demolishing the Nasla Tower.

The CJP then remarked that authorities have not even brought down the Tijori Heights building.

"The demolition process of Tijori Heights is underway," responded the commissioner.

"If the operation is underway, submit a report on it by afternoon, with pictures [as evidence]," replied the chief justice.

Commissioner Karachi Iqbal Memon then left the court and arrived at the site to start the demolition process.

Speaking to newsmen, he said the demolition process has started and the process will go into full swing by the evening.

On October 25, the SC had directed authorities in Karachi to demolish Nasla Tower in Karachi within seven days.

The top court had directed to use latest technology in the process and take all the expenses from the owner of Nasla Tower.

The CJP directed the owner of Nasla Tower to compensate the occupants and ordered the Karachi commissioner to ensure payments are made to the affectees.

Earlier in October, Nasla Tower residents had been issued a notice to vacate the building by October 27 or face legal action.

The notice was issued on October 12 by an official of the District East after the apex court’s rejection of a review petition that requested the court to take back its order to demolish Nasla Tower.

The order had mentioned that the commissioner has to submit a report on the SC's instructions and ensure the building is vacated.

In June, the SC had ordered the tower’s demolition over its illegal construction on a service road, telling the builders to refund the registered buyers of the residential and commercial units within three months.