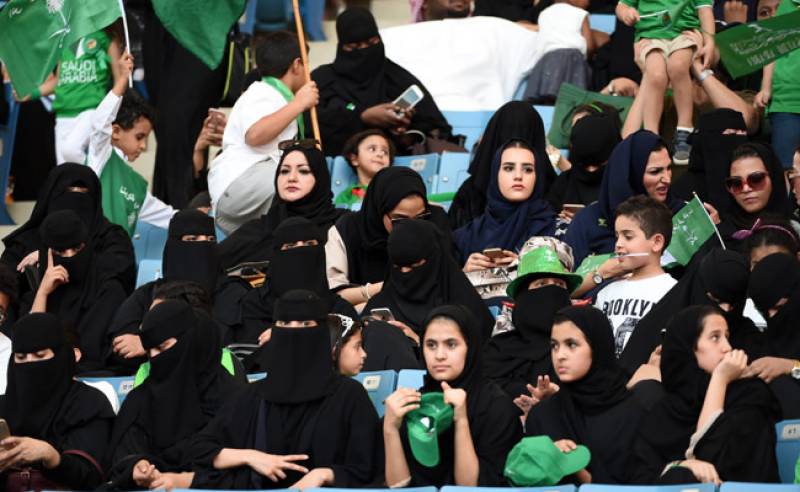 Riyadh (Reuters) - Saudi Arabia is celebrating the 87th anniversary of its foundation this weekend with a big program of concerts and performances, including a pageant operetta on Saturday evening which allowed women to enter the King Fahd International Stadium in Riyadh for the first time.

The festivities are part of a government move to boost national pride and improve quality of life for Saudis.

Also on offer is a concert in the Red Sea city of Jeddah featuring 11 Arab musicians, plus fireworks, air acrobatics and traditional folk dance shows.

“It is the first time I have come to the stadium and I feel like more of a Saudi citizen. Now I can go everywhere in my country,” said 25-year-old Sultana, green and white flags painted on both cheeks as she entered the complex with her girlfriends.

“God willing, tomorrow women will be permitted bigger and better things like driving and travel.” A toddler wore a shirt that said in English “I (heart) Saudi Arabia” while a little girl donned a green dress with the faces of King Salman and his son, Crown Prince Mohammed, printed on it. A young man recited a poem praising the 82-year-old monarch.

The events are the latest entertainment sponsored by the government as part of the Vision 2030 reform program launched two years ago to diversify the economy away from oil, create whole new sectors to employ young citizens and open up Saudis’ cloistered lifestyles.

However in a country that adheres to the austere Wahhabi brand of Sunni Islam, which bans gender mixing, concerts and cinemas, the plan’s seemingly anodyne goals to empower women, promote sports and invest in entertainment have been criticized. Saudi rulers are also starting to reform areas once the exclusive domain of the clergy, such as education and the law, and have promoted elements of national identity that have no religious component or pre-date Islam.

They have increased National Day celebrations that were previously attacked by clerics as undermining religious feeling, and are promoting heritage sites, like Nabatean rock temples, once seen as embarrassing in the land of Islam.

King Salman marked the holiday on Twitter, writing: “The kingdom will remain a bulwark for those who love benevolence, their religion and their country.”

The operetta on Saturday told the story of the founding of the modern Saudi state by Ibn Saud, King Salman’s father, following a series of territorial conquests and eight years before the discovery of oil opened the way to making the new kingdom the world’s top oil exporter.

The performance, which praised the kingdom’s religious and martial past while looking ahead to more development, featured horses, camels and hundreds of men dancing with swords and drums. An unveiled woman and two dozen girls joined them onstage.

Pyrotechnics, dancing fountains and lasers elicited cheers from the crowd which snapped photos on their smartphones.

The final segment featured pictures of Crown Prince Mohammed - visiting troops, meeting world leaders, watching a football match - whose face has become nearly as ubiquitous as his father’s since he became heir to the throne in June.

There is widespread speculation, denied by officials, that King Salman intends to abdicate to his son, who already dominates economic, diplomatic and domestic policy.

Saudi flags and green billboards, often bearing the faces of both men, have gone up across Riyadh this week, and at night skyscrapers are flooded in green light - the national color.

Um Abdulrahm al-Shihri, who traveled 1100 km (685 miles) from the northwestern city of Tabuk, to enter the stadium, said she hoped in the future women would be able to attend football matches and other public festivities which are traditionally the reserve of men.

“You cannot imagine how happy we are today ... We feel that there is openness towards us,” she said, wearing the black niqab covering all but her eyes. “Women are at all levels now - women are now (representatives) in the Shura council, women are now doctors, women are now in big positions. So why shouldn’t we join the men in things that matter to our nation?”

Vision 2030 reforms are intended to capture up to a quarter of the $20 billion currently spent overseas by Saudis, who are accustomed to traveling abroad to see shows and visit amusement parks in nearby tourist hub Dubai or further afield. This weekend’s events, though, are free to the public.

Issa Daghiri, attending the operetta in Riyadh with his wife and children, said he was encouraged by the acceptance of families at the stadium, which holds about 40,000 spectators.

“We had hoped for this for a while and now the opportunity has come,” he said. “Each year that passes, the kingdom develops.”