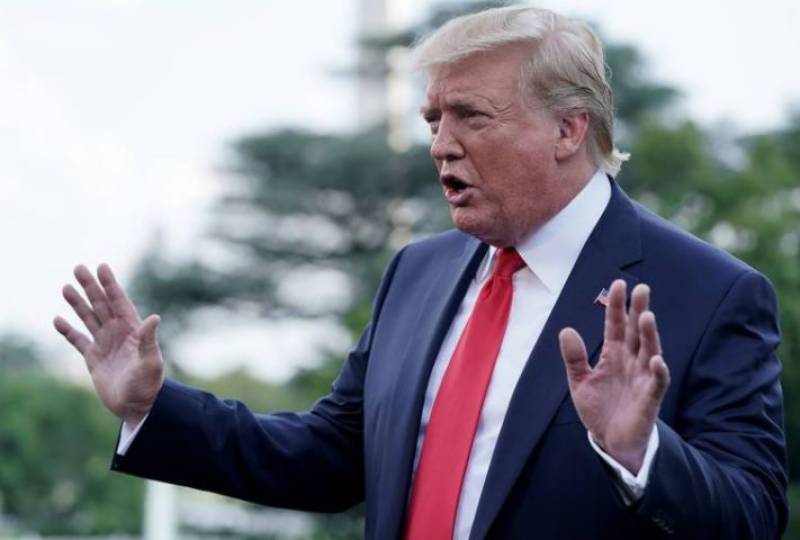 New Delhi (Web Desk): US President Donald Trump on Tuesday reiterated his offer to mediate between India and Pakistan on Kashmir issue, the Indian media reported.

Addressing a press conference in New Delhi at the end of his two-day visit, and after holding meetings with the Modi administration, the US president said that he has already spoken to Prime Minister Imran Khan and Indian PM Narendra Modi on Kashmir issue.

Trump said that if there was anything he could do to mediate between India and Pakistan on the issue of Kashmir.

"Kashmir has been a thorn in a lot of people's sides for a long time and there are two sides to every story," he said.

Responding to a question regarding the issue of religious freedom in India, President Trump said that he discussed the issue and got a very 'powerful answer' from the Indian prime minister.

"We talked about religious liberty for a long time, in front of a lot of people and I had a very, very powerful answer from him [Modi]," he said.

Responding another question about India's controversial citizenship law, the US president said he did not want to comment on it.

"I want to leave that to India and hopefully they will make the right decision for the people," Trump said.

When asked about the criticism for his policies against Muslims, the US president replied: “I won the travel ban, and we use it where we think it is necessary not based on a religion. We won it in the Supreme Court and we bar those people from travelling to our country who might hurt our citizens,” he said.

Earlier on Monday, while addressing a mammoth crowd of more than 100,000 people at the opening of the world’s largest cricket stadium in the western state of Gujarat, President Trump said that his administration is hopeful for “reduced tensions and greater stability” between Pakistan and India.

“Our relationship with Pakistan is a very good one. Thanks to these efforts, we are beginning to see signs of big progress with Pakistan,” he said.

This is pertinent to mention here that Trump has offered to mediate between the two countries on Kashmir on multiple occasions.

In January, he reiterated the same during a meeting with Prime Minister Imran Khan on the sidelines of the World Economic Forum (WEF) assembly in Davos, Switzerland.

However, India has categorically rejected the offer to mediate, calling the issue an internal matter.

Recently, Indian Ministry of External Affairs Spokesperson Raveesh Kumar stated that there is no role for any third party in the Kashmir issue.  "It is a bilateral issue between India and Pakistan," he said.