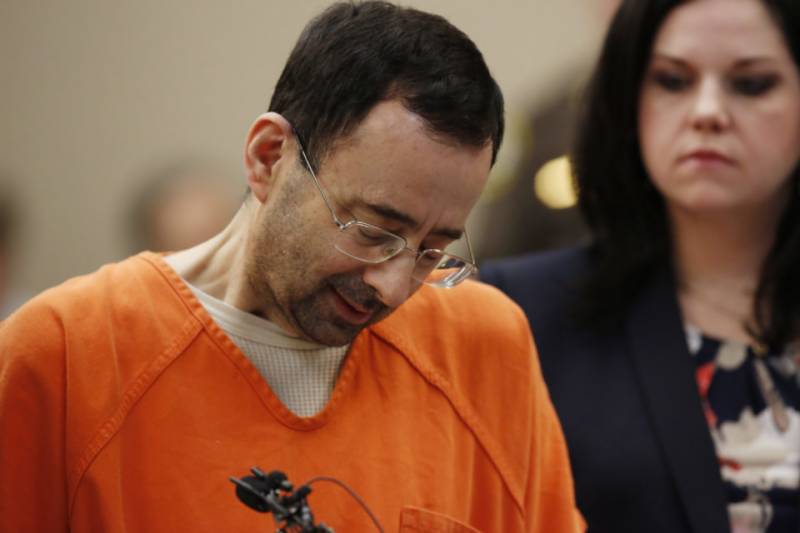 Michigan (Reuters): As his victims wept in a Michigan courtroom on Wednesday, disgraced long-time USA Gymnastics team doctor Larry Nassar was sentenced to up to 175 years in prison for abusing young female gymnasts who were entrusted to his care.

Spectators and victims cried, applauded and embraced as Nassar, 54, wearing a dark blue jailhouse jumpsuit, was led out of the courtroom. Rachael Denhollander, the first woman to publicly accuse him in 2016, shared a hug with Angela Povilaitis, the lead prosecutor.

After the sentence decision, the president of Michigan State University, where Nassar also worked, said she was resigning after facing a barrage of criticism for not doing enough to halt the abuse.

The chief of the US Olympic committee called for all USA Gymnastics directors to resign.

Nassar, who served as the program’s physician through four Olympic Games, apologized to his victims during the hearing, telling them, “I will carry your words with me for the rest of my days.” 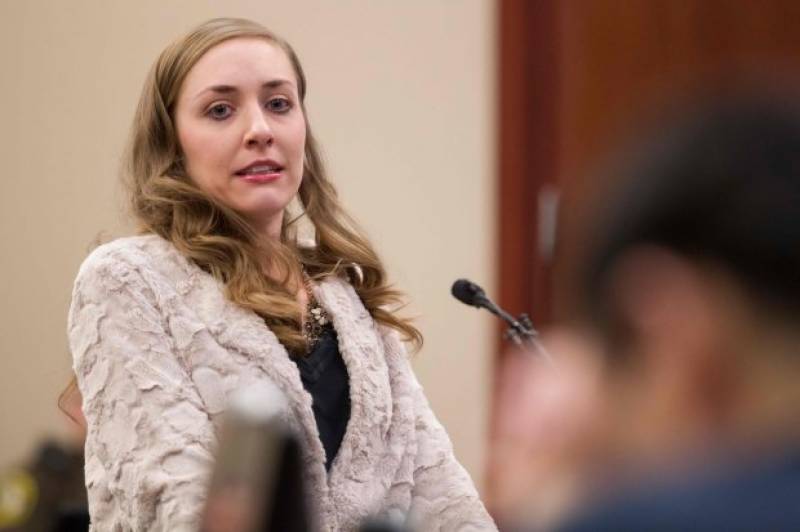 Aquilina dismissed his statement as insincere and courtroom spectators gasped as the judge read aloud from a letter he wrote to her claiming he was a good doctor who was manipulated into pleading guilty.

Nassar, who already is serving a 60-year sentence in federal prison for child pornography convictions, also said his accusers fabricated claims to gain money and fame, writing, “Hell hath no fury like a woman scorned.”

“Would you like to withdraw your plea?” Aquilina asked Nassar after tossing aside his letter. “No, your honor,” Nassar said.

“Because you are guilty, aren’t you? Are you guilty, sir?” the judge demanded. After a long pause, Nassar said quietly, “I have said my plea, exactly.”

The prosecution and Aquilina emphasized the broader significance of the sentencing, coming amid a national debate over sexual misconduct prompted by accusations against powerful men from Hollywood to Washington.

“At this particular moment in history, this sentence and hearing will be viewed as a turning point in how our community, our state, our nation, our culture looks at sexual abuse,” Povilaitis said.

Aquilina rattled off a series of statistics about the prevalence of sexual abuse before saying, “It stops now.” The sentencing followed an extraordinary week-long hearing that saw Nassar’s victims unflinchingly, defiantly tell their stories in raw terms.

Despite Nassar’s objections, Aquilina allowed victims who were not part of his guilty plea to speak at his sentencing. Throughout much of the proceedings, the bespectacled Nassar sat with his head bowed, rarely making eye contact with his accusers.

The women ranged from famous Olympic gold medalists like Aly Raisman to former gymnasts like Denhollander, now a lawyer, who was the last of the victims to speak on Wednesday and whom Aquilina described as “the bravest person I have ever had in my courtroom.”

McKayla Maroney, a gold medalist at the 2012 London Olympics, called Nassar a “monster human being,” while a former member of the US national team said his abuse led to depression and an eating disorder. 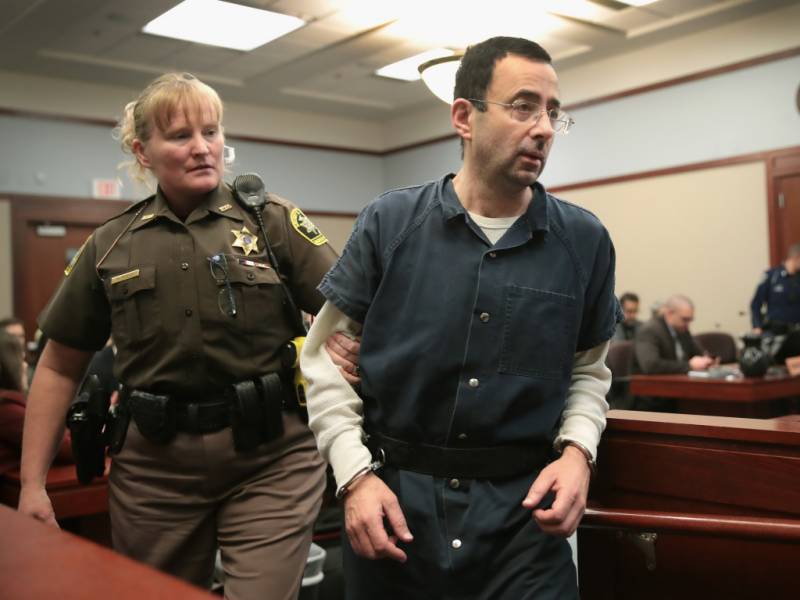 Another gymnast said she was only 6 years old when Nassar began molesting her and blamed the doctor for her father’s suicide once he realized she had not been lying about the abuse she endured.

“I’ve been forever changed by all of this and I will never feel small again,” Bailey Lorencen said after the sentencing. She had been an anonymous accuser until she spoke in court this week. “I have a different confidence in myself as a woman.”

In addition to Raisman and Maroney, Olympic gold medalists Simone Biles, Jordyn Wieber and Gabby Douglas went public in recent months with their own accusations against Nassar.

Nassar pleaded guilty in November to seven counts of first-degree sex assault in Ingham County, as well as three charges in Eaton County, where he is due to be sentenced next week.

Around 140 victims have filed a lawsuit against Nassar, USA Gymnastics and Michigan State University (MSU), claiming the institutions knew about allegations of abuse years ago and failed to act. The gymnastics body and the school have asked a judge to dismiss the cases.

“As tragedies are politicized, blame is inevitable. As president, it is only natural that I am the focus of this anger,” MSU President Lou Anna Simon said in her resignation letter.

“We agree with Dr. Simon that it is now time for change,” Brian Breslin, chair of the university’s board of trustees, said in a statement.

Some of the sport’s biggest names, most notably Raisman, have said USA Gymnastics is in need of reform.