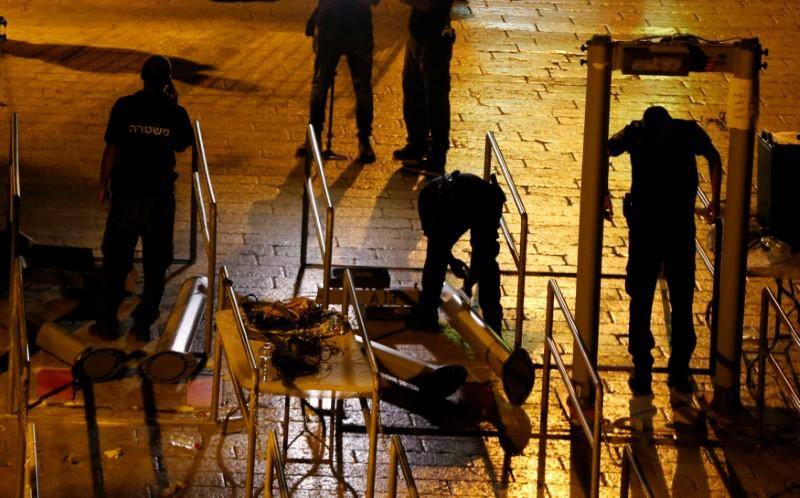 Jerusalem (Reuters) - Israel decided on Tuesday to remove metal detectors it had placed at the entrance to a holy site in Jerusalem's Old City and replace them with smart, less obtrusive surveillance means, a Cabinet statement said.

Israel installed metal detectors at entry points to Al-Aqsa mosque compound in Jerusalem after two police officers were fatally shot on July 14, triggering the bloodiest clashes between Israelis and Palestinians in years.

The spike in tensions and the deaths of three Israelis and four Palestinians in violence on Friday and Saturday have triggered international alarm and prompted the United Nations Security Council to convene a meeting to seek ways of calming the situation.

Prime Minister Benjamin Netanyahu's Cabinet voted to remove the metal detector gates after a meeting lasting several hours convening for a second time on Monday after it had broken off discussions a day earlier.

A statement issued after the forum of senior ministers concluded their meeting said they had decided to act on the recommendation of the security bodies and replace the metal detectors with "smart checking" means.

Reuters witnesses in the Old City saw municipal workers installing metal beams above some of the narrow stone paved streets for closed-circuit TV cameras. Israeli media said there were plans to invest in advanced camera systems.

The Cabinet statement added that it had allocated 100 million shekels (about $28 million) for the equipment and for additional police officers.

Tuesday's decision to remove the metal detector gates was an about-turn after the rightist Netanyahu, wary of being seen to capitulate to Palestinian pressure, said on Sunday the devices would stay put.

But on top of the outbreak of violence mainly in the Jerusalem area, a Palestinian move on Friday by President Mahmoud Abbas to suspend official contacts and international criticism put pressure on Israel.

Netanyahu was further hampered following a fatal shooting incident at the Israeli embassy in Jordan on Sunday when an Israeli security guard was attacked and shot dead two Jordanians.

Jordan is the custodian of Jerusalem's Muslim holy sites, which Jews revere as the vestige of their two ancient temples and which was among East Jerusalem areas Israel captured in a 1967 war and annexed as its capital in a move not recognized internationally.