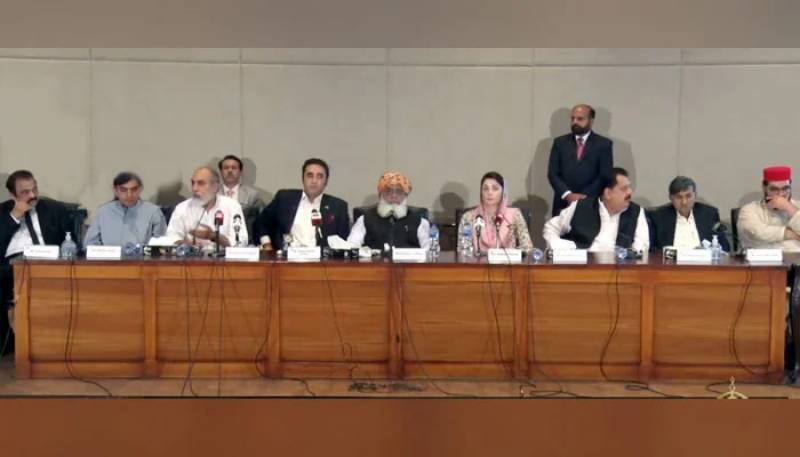 Islamabad (Staff Report/Agencies): The coalition government on Monday reiterated its demand for the formation of a full bench of the Supreme Court to hear Pakistan Muslim League-Quaid (PML-Q) leader Chaudhry Pervaiz Elahi’s petition against the election of Punjab chief minister.

Addressing a press conference Pakistan Muslim League-Nawaz (PML-N) Vice President Maryam Nawaz, along with Foreign Minister Bilawal Bhutto-Zardari, Jamiat Ulema-e-Islam-Fazl (JUI-F) chief Maulana Fazlur Rehman and other political leaders said that she had been advised not to hold the media talk as it would affect her appeal in the Panama Papers case that was being heard by the Islamabad High Court. “However, I said that the people’s representative has to think beyond themselves and think about the people,” she added.

Bilawal Bhutto said three people cannot decide on whether this country will run on a democratic, elected or selected system.

Maulana Fazlur Rehman endorsed Maryam’s view saying that fingers were being pointed at the judiciary. “The government wanted to strengthen the judiciary so that their decisions spoke for themselves,” he said and added, “They shouldn’t have any conflict or give the impression of being biased.”

It is the second time that Hamza defeated Pervez Elahi in the election for Punjab CM slot. The last time he had secured victory on April 16, his oath-taking had been delayed for days with then-governor, Omer Sarfraz Cheema, refusing to administer the oath to him.