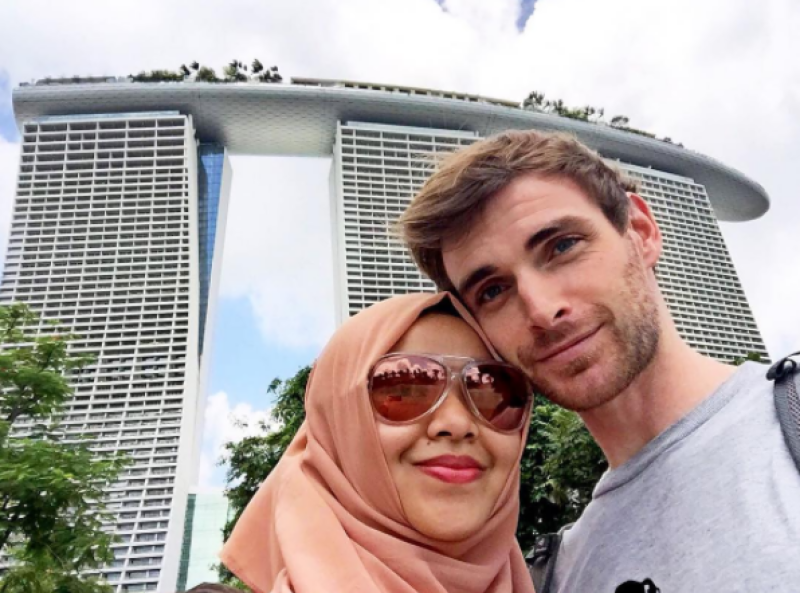 Jakarta, Indonesia (Web Desk): Sometimes people have to wait for a long time to find who they belong to, who is their soul mate, the one made for them. A Dutch man traveled through 60 countries to find his soul mate and embraced Islam.

Michael, 29-year-old, from Netherlands first met with the 22-year-old Adin Lubis from Indonesia while he was travelling through Southeast Asia.

He said that he thought to spend the Ramadan with a local Muslim family. He found Adin on social media and left a message for her. Surprisingly, she immediately invited him to stay 3 days with her family in Medan, Indonesia during the Ramadan.

“We have so many things to show and teach each other,” he added.

As a traveler, Michael neither stayed in hotels nor hostels. He make it a point to always stay with local families which he has done so for over 60 countries!

“Most of my host families in Indonesia and Malaysia were Muslim families. Those families never asked me to convert, but they just showed me their way of living. That’s how they inspired me to learn more about Islam and this is the reason I decided to take classes about Islam at local mosques in Kuala Lumpur and Jakarta.”

Michael further added, “While taking the classes, I still didn’t have the intention to convert. My teachers respected that and only insisted to show me more about Islam. After a few weeks of discussions, reading Quran and practicing how to pray, I knew that converting to Islam would be the right thing to do in my life.”

And so, Michael eventually embraced Islam. According to their Instagram, Michael and Adin currently live and work in Belgium where he works in an office while Adin is a freelance journalist. They’ve been travelling around the world through backpacking.

Have a look at the pictures of the happy couple: