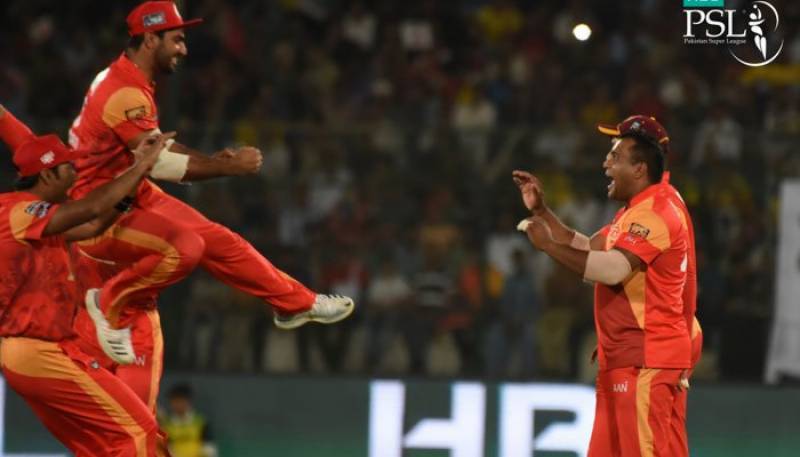 Peshawar Zalmi gave a target of only 149 runs and Islamabad United met the target successfully in 16.5 overs. Luke Ronchi played well and scored a fiery 52 from 26 balls. United lost its second wicket on 97 score, Sahibzada Farhan scored an impressive 44 of 33 deliveries.

During the last moments, Kamran Akmal dropped a catch of Asif Ali that led Zalmi to defeat because after it Asif Ali sealed the fate of Peshawar and dashed their hopes hitting three towering sixes, back to back.

Zalmi had a bad start as their main opening batsman Kamran Akmal was dismissed by Samith Patel for one run. In the second over of Samith, Muhammad Hafeez  gave an easy catch to the bowler on eight runs felling victim to his flight ball.

The next was opener Andre Fletcher who was dismissed by youngster Shadab Khan.

Hussain Talat ended innings of Chris Jordan and Saad Nasim on the respective scores of 36 and two runs.

9 players were down of Zalmi, when Pacer Wahab Riaz played a cameo innings of 28 runs to lead his team to a fighting score of 148/9.

Spinner Shadab Khan was impressive, as he took 3 wickets including the Zalmi’s Captain Darren Sammy.

It is pertinent to remember that Islamabad United who finished at the top of round-robin stage, qualified for the final after comprehensively beating Karachi Kings by eight wickets.

Peshawar Zalmi defeated Quetta Gladiators by a single run in the first eliminator. They went on to qualify for the final by beating Karachi Kings by 13 runs.