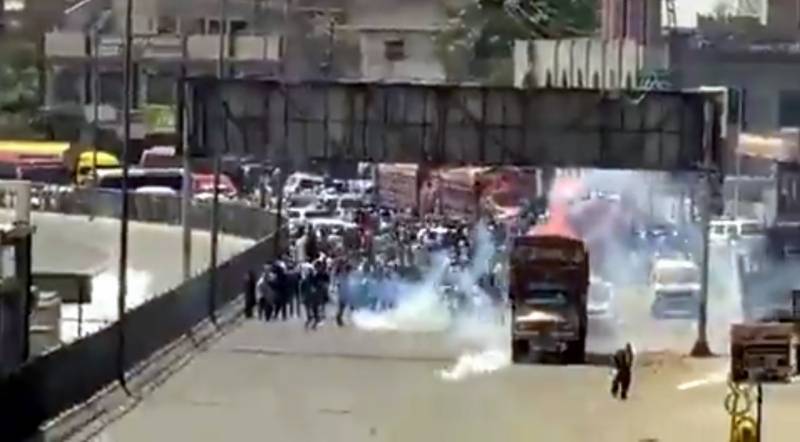 Lahore (Web Desk): The Lahore police and the workers of the Pakistan Tehreek-e-Insaf (PTI) clashed at Batti Chowk in Lahore on Wednesday as the protesters are trying to march towards Islamabad on the call of party chief Imran Khan.

As per the details, the PTI workers started gathering at the Batti Chowk after announcement by the party's  Lahore chapter that the 'Azadi March' will be started from this point.

The police officials and protesters clashed at the intersection when attempts were made to remove the barriers.

It is pertinent to mention that the PTI on Wednesday started its long march towards Islamabad as announced by party chief Imran Khan.

On the other hand the federal government  has decided to stop PTI's long march to Islamabad while reiterating to ensure safety to public life and property.

Addressing the press conference on Tuesdasy, Federal Minister for Interior Rana Sanaullah said that the government will not allow the PTI spread "chaos and disorder" in the guise of the march.

Meanwhile, commuters in the twin cities and the areas surrounding Islamabad faced hardship and traffic congestion as the law enforcers blocked multiple roads with containers and other barricades in an attempt to curtail PTI's long march on the federal capital.

As per the reports, all routes from Rawalpindi to Islamabad were sealed with containers and routes leading from Rawat Chowk to Islamabad Expressway were closed. Routes on Murree Road were also after various containers were placed.

The Faizabad area was completely sealed from the Express Highway, IJP Road and Murree Road and commuters going to Islamabad faced severe difficulties.

A heavy contingent of Rawalpindi police was also deployed around the blockades.

The Metro bus service and public transport were shut down in Rawalpindi, as were educational institutions, shopping malls and bus stands.

Containers also sealed both sides of the Rawalpindi Sawan Bridge while Rawalpindi to GT road was closed from the seventh bridge.

In Lahore, police and city administration has closed all routes, including Ravi Bridge and Babu Sabu Interchange, leading to Islamabad.

Former prime minister and PTI chairman Imran Khan on Tuesday said that he will lead a biggest procession in Pakistan's history on Wednesday.

Moreover, Islamabad Traffic Police has issued a traffic plan to facilitate the public ahead of Pakistan Tehreek-e-Insaf's long march to the federal capital.

According to an official update, entry and exit points to the red zone have been closed at ‘Ayub chowk’, ‘NADRA chowk’, ‘Express chowk’, and ‘Serena chowk’. Those who wish to enter or exit the red zone can only use Margalla road.

The authorities have set up tight security measures across Islamabad’s sensitive points.

The law enforcement agencies will also conduct security checks on the people traveling to or from Islamabad.