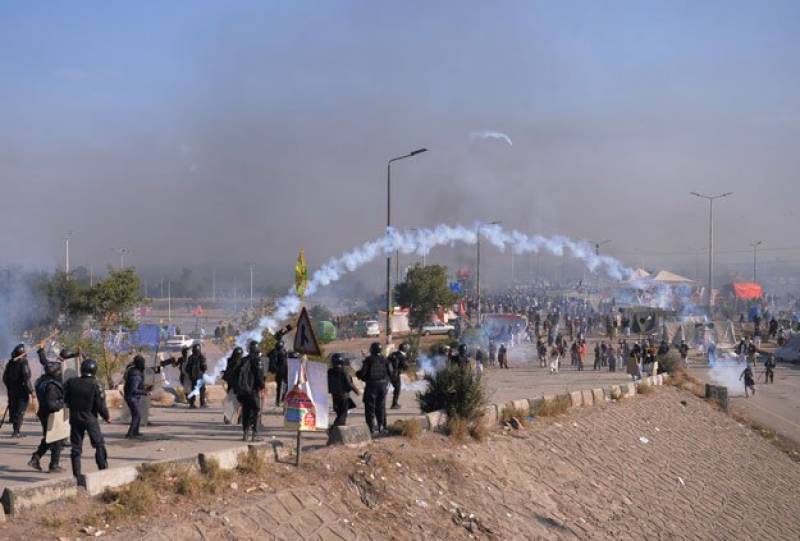 Lahore/Karachi (Staff Report/Agencies): Protests erupted across the country on Saturday soon after Islamabad police, with the help of Frontier Constabulary personnel and other law enforcement agencies, launched a crackdown against protesters camped out at the Faizabad Interchange since November 8.

Four people, policemen among them, were injured when the protesters clashed with police personnel in the provincial capital’s Shahdara area. A large number of activists of the protesting religious parties also gathered at the Mall Road and chanted slogans against the government.

In Faisalabad, dozens of workers of the religious parties gathered at Chishtia intersection and blocked the road connecting the city with Sarghoda district.

Similar protesters were also witnessed in Pattoki, Jalapur Bhattian, Ferozwala, Gujranwala, Burewala, Serai Alamgir and Attock and other parts of the province. The law enforcement agencies launched the operation early Saturday morning after the capital administration’s final deadline of 7am to end the Faizabad sit-in expired.

“COAS telephoned PM. Suggested to handle Isb Dharna peacefully avoiding violence from both sides as it is not in national interest and cohesion,” DG ISPR Major General Asif Ghafoor tweeted on Saturday. According to a circular issued by PEMRA on Saturday, the “live coverage of any security operation is prohibited, therefore all Satellite TV channels licenses are directed to exhibit utmost sensitivity over the matter and comply with Clause 8(8) of Electronic Media (Programmes and Advertisements) Code of Conduct 2015, in letter and spirit and refrain from live coverage of the ongoing operation at Faizabad, Islamabad.”