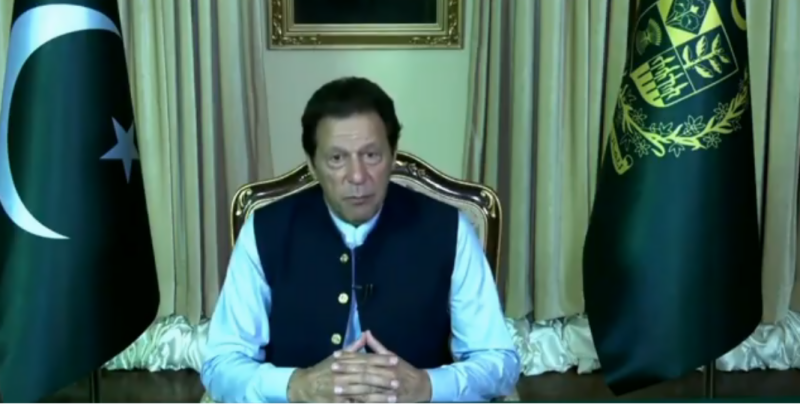 During his address, the PM said that India was "obliterating the distinct Kashmiri identity" through it illegal measures in the occupied territory.

"While the Nazis' hate was directed at the Jews, the RSS directs it at the Muslims, and to a lesser extent, the Christians," PM Khan said and added that the extremist ideologists believe that India is exclusively for Hindus and others are not equal citizens.

"The secularism of Gandhi and Nehru has been replaced by the dream of creating a Hindu Rashtra, by subjugating, even cleansing India's 200 million Muslims and other minorities," the premier maintained.

The prime minister also spoke about Israel's occupation of Palestine and said that Pakistan supported a solution in line with UN resolutions.

PM Khan also condemned the rising incidences of the burning of the Holy Quran and the publication of blasphemous material against Prophet Muhammad (PBUH).

PM Imran said Covid-19 has made the world realised benefits of unity, saying, “No one is safe until everyone is safe”.

“Mankind today is at a greater risk than it was during the World War I and II,” he quoted Noam Chomsky.

The event is being convened to present the interim report of the panel, which identifies the major gaps in implementation and the systemic shortcomings of the existing international frameworks for tax cooperation, anti-corruption and anti-money laundering.

The 15-member panel was launched in March by the Presidents of UN General Assembly and UN Economic and Social Council.

The forum was formed to help address the financing gap for implementing the anti-poverty Sustainable Development Goals by 2030.

In his capacity as President of the UN Economic and Social Council, Pakistan's Permanent Representative to the United Nations, Munir Akram, is also set to speak in panel's moderated session.