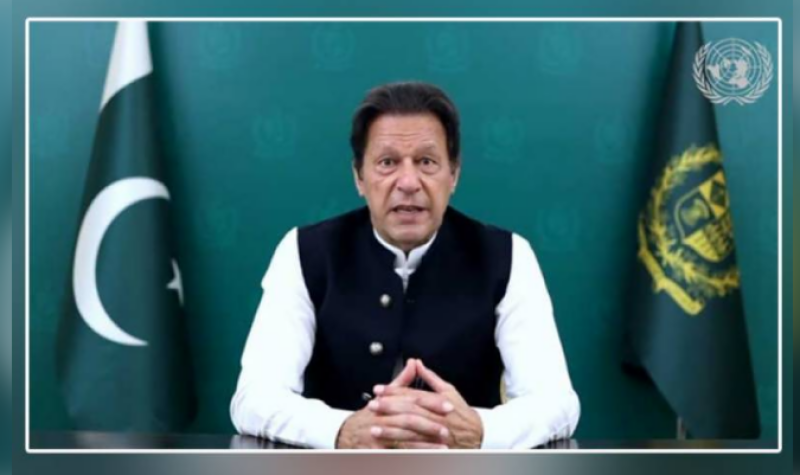 Islamabad (Web Desk): Prime Minister Imran Khan has called upon the international community to strengthen and stabilise the current government in Afghanistan for the sake of Afghan people.

PM Imran said if the world community incentivises Taliban, it will be a win-win situation for everyone.

The prime minister said that the Taliban have promised to respect human rights, have an inclusive government and to not allow their soil to be used by terrorists. Besides, they have also given amnesty.

He said there is a huge humanitarian crisis looming ahead and this will have serious repercussions not just for the neighbours of Afghanistan but everywhere.

PM Khan warned that taking a course contrary to this would further destabilise the war-torn country and turn it into a terrorists’ haven.

He said there is no time to waste as help is needed there. PM Imran urged the UN Secretary General to mobilise the international community for the humanitarian assistance of Afghan people.

Alluding to Indian atrocities and oppression in IIOJK, PM Imran said India is engaged in efforts to change the demographic structure of the occupied territory and transform it from a Muslim majority into a Muslim minority.

He said the Indian actions violate the resolutions of the UN Security Council on Jammu and Kashmir.

Regretting the world’s approach to violations of human rights lacks even-handedness, he said such double standards are the most glaring in case of India, where this RSS-BJP regime is being allowed to get away with human rights abuses with complete impunity.

Reaffirming Pakistan's desire for peace, he stressed that sustainable peace in South Asia is contingent upon resolution of the Jammu and Kashmir dispute, in accordance with the relevant United Nations Security Council (UNSC) resolutions, and the wishes of the Kashmiri people.

He said the onus remains on India to create a conducive environment for meaningful and result-oriented engagement with Pakistan.

He called upon India to:

*Reverse its unilateral and illegal measures instituted since August 5, 2019;

*Stop its oppression and human rights violations against the people of Kashmir; and

*Halt and reverse the demographic changes in the occupied territory.

PM Imran said it is also essential to prevent another conflict between Pakistan and India.

Emphasizing for collectively dealing with the issue of Islamophobia, PM Imran regretted that the linking of terrorism with Islam by some quarters, which, he said, increased the tendency of right-wing, xenophobic and violent nationalists, extremists and terrorist groups to target Muslims.

He pointed out that the worst and most pervasive form of Islamophobia now rules India. He said the hate-filled Hindutva ideology, propagated by the fascist RSS-BJP regime, has unleashed a reign of fear and violence against India’s 200 million strong Muslim community. Mob lynching by cow vigilantes, frequent pogroms, discriminatory citizenship laws to purge India of Muslims and a campaign to destroy mosques across India and obliterate its Muslim heritage and history, are all part of this criminal enterprise.

Imran Khan called upon the UN Secretary General to convene a global dialogue on countering the rise of Islamophobia.  “Our political efforts must continue to promote interfaith harmony, he said.

Stressing for vaccine equity, he said everyone must be vaccinated against the pandemic as soon as possible.

Expressing satisfaction over Pakistan's successfully handling of the pandemic, he said our calibrated strategy of smart lockdowns helped save lives and livelihoods and kept the economy afloat.

PM Imran called on the UN secretary-general to convene a summit in 2025 to review and accelerate implementation of Sustainable Development Goals (SDGs).

Turning his focus to climate change, he termed it one of the "primary existential threats" that the world faces today. He said although Pakistan's contribution to global emissions is negligible, it is among the 10 countries that are most vulnerable to the effects of climate change.

“Being fully aware of our global responsibilities, we have embarked upon game-changing environmental programmes including reforesting through our 10 Billion Tree Tsunami, preserving natural habitats, switching to renewable energy, removing pollution from our cities and adapting to the impacts of climate change,” PM Imran asserted.

He said the Secretary General's High-Level Panel on Financial Accountability, Transparency and Integrity (FACTI) has calculated that a staggering seven trillion dollars in stolen assets are parked in the financial "haven" destinations.

Khan said this organised theft and illegal transfer of assets has profound consequences for the developing nations.

The prime minister said a trillion dollar every year is taken out of the developing world. He said retrieving the stolen assets from the developed countries is impossible for poor nations.

“The rich countries have no incentives, or compulsion, to return this ill-gotten wealth, which belongs to the masses of the developing world,” the PM said.