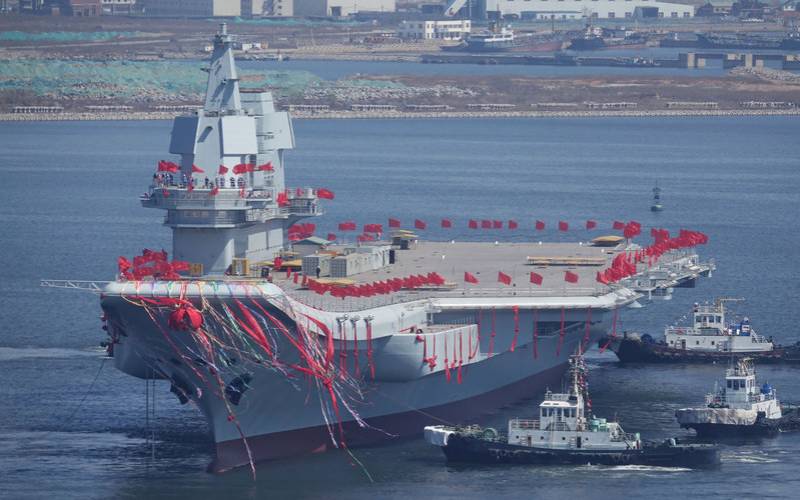 State media has quoted military experts as saying the carrier, China's second and built in the northeastern port of Dalian, is not expected to enter service until 2020, once it has been kitted out and armed.

State television showed the carrier, its deck lined in red flags, being pushed by tug boats into its berth.

Fan Changlong, a vice chairman of China's powerful Central Military Commission, presided over the ceremony, Xinhua said, during which a bottle of champagne was broken on the bow.

The launch follows China's celebration on Sunday of the 68th birthday of the founding of the Chinese navy, and comes amid renewed tensions between North Korea and the United States over Pyongyang's nuclear and missile programs.

Little is known about China's aircraft carrier program, which is a state secret.

But the government has said the new carrier's design draws on experiences from the country's first carrier, the Liaoning, bought second-hand from Ukraine in 1998 and refitted in China.

Unlike the U.S. navy's longer-range nuclear carriers, both of China's feature Soviet-design ski-jump bows, intended to give fighter jets enough lift to take off from their shorter decks. But they lack the powerful catapult technology for launching aircraft of their U.S. counterparts.

"NO NEED" TO MATCH THE UNITED STATES

China's navy has been taking an increasingly prominent role in recent months, with a rising star admiral taking command, its first aircraft carrier sailing around self-ruled Taiwan and new Chinese warships popping up in far-flung places.

The Liaoning has taken part in military exercises, including in the South China Sea, but is expected to serve more as a training vessel. State media has said the new carrier will be more dedicated to military and humanitarian operations.

China claims almost all the South China Sea, believed to have huge deposits of oil and gas, through which about $5 trillion in ship-borne trade passes every year, and has been building up military facilities like runways on the islands it controls.

Brunei, Malaysia, the Philippines, Taiwan and Vietnam also have claims.

Taiwan, claimed by Beijing as its own, has said China is actually building two new aircraft carriers, but China has not officially confirmed the existence of another carrier.

Chinese state media has quoted experts as saying that the country needs at least six carriers. The United States operates 10 and plans to build two more.

Major General Chen Zhou, a researcher at the Academy of Military Science, told reporters in March that China would not exceed the United States in carrier groups. "China has no need for this," he said.

Sam Roggeveen, a senior fellow at the Sydney-based Lowy Institute, said that by the time China had half that number, it could go toe-to-toe with the U.S. navy in the Asia-Pacific.

"Given that the Americans have global obligations and responsibilities but China doesn't, then effectively by that point they would be evenly matched," Roggeveen said.

Most experts agree that developing such a force will be a decades-long endeavor but the launch of the second carrier holds a certain prestige value for Beijing, seen by many analysts as keen to eventually erode U.S. military prominence in the region.

"With two aircraft carriers you could say without much fear of contradiction that China, other than the United States, is the most powerful maritime force in the Asia-Pacific," Roggeveen said.