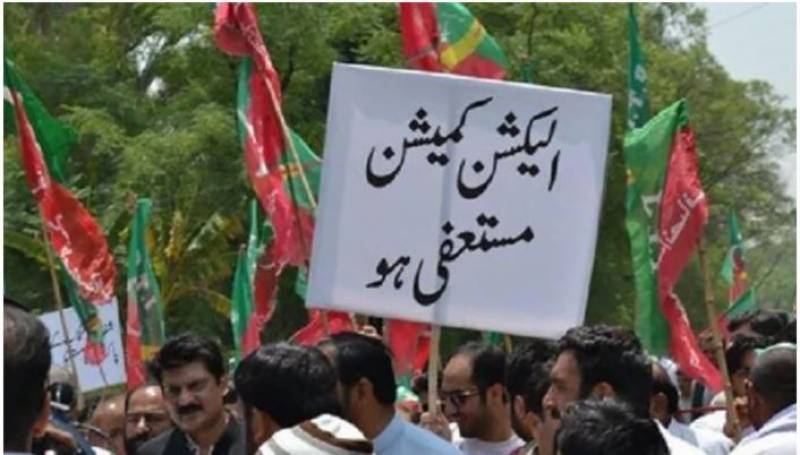 Islamabad (Web Desk): The Pakistan Tehreek-e-Insaf (PTI) on Tuesday staged country-wide protest outside the district offices of the Election Commission of Pakistan’s (ECP) against the alleged biased attitude of the chief election commissioner (CEC).

As per the details, The Red Zone in the federal capital was sealed due to the protest. However, PTI workers, led by the former member of provincial assembly Ali Nawaz Awan, protested at the Nadra Chowk.

A heavy contingent of police was deployed outside the ECP in Islamabad after the protest was announced, and Section 144 was enforced in the Red Zone by the deputy commissioner of Islamabad. Political parties and citizens were urged not to protest in the Red Zone.

Meanwhile, the PTI also a protest outside the Election Commission Sindh offices in Karachi where MPAs and workers chanted anti-ECP slogans.

In Peshawar, the PTI workers protested outside ECP office and chanting slogans against the CEC.

The protestors demanded the removal of the CEC.

The announcement about holding protests outside the ECP offices was made by PTI leader Fawad Chaudhry on Twitter.

In his tweet, the former information minister accused the CEC of being “partisan and dishonest”, adding the ECP was not de-notifying membership of the party’s dissident legislators.

Tensions between the PTI and the commission turned even bitter when on April 23, Imran also accused the CEC of being biased and demanded his resignation.

Reacting to the PTI's protests, Federal Minister for Information Mariyum Aurangzeb said that Imran Khan wanted a judge, lawyer and decision to all be in his favour.

Reacting to Fawad's statement, the minister said that Imran should instead answer questions about his party's foreign funding case in the ECP, but all those questions are responded to with “abuses and threats”.

Meanwhile, Minister for Planning Ahsan Iqbal said that the former premier's attack on the ECP was “blackmailing”.

Talking to newsmen in Islamabad, the minister said that Imran Khan-led former government had not taken a single step for the development of the country or the welfare of the people.