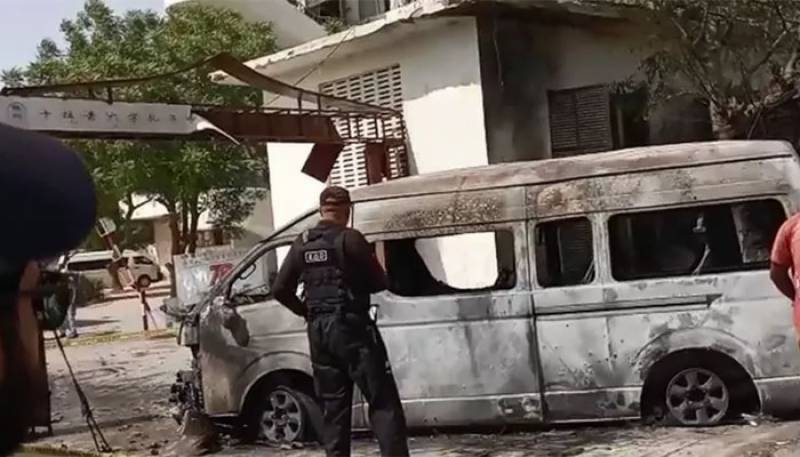 Karachi (Web Desk): At least four people, including three Chinese nationals, were killed and several others injured in a suicide attack near Confucius Institute inside University of Karachi on Tuesday.

The explosion occurred in a white Hiace van near the gate of the Confucius Institute, a Chinese language teaching centre, inside the varsity premises. The Chinese nationals were part of the institute's faculty.

Counter-Terrorism Department (CTD) Karachi chief Raja Umar Khattab confirmed that the Karachi University blast was a suicide attack  and a burqa-clad woman seen in the CCTV footage was responsible for it.

It killed four people including two Chinese women and a man and also injured four, he said while speaking to the media.

The CTD official said that the was carried out after reiki.

Police sources said that there were seven to eight people in the van; however, an exact number of casualties is yet to be determined. The van entered the premises through the Maskan gate, they said.

The blast was initially reported to have been caused by a gas cylinder. However, the police later said that the blast could have been a suicide attack.

"We suspect that it's a suicide attack. A burqa-clad woman approached the van and the blast took place," said Karachi police chief Ghulam Nabi Memon.

He said that the investigations regarding the incident were underway but it seems that the Chinese teachers were the actual target of the explosion.

The bomb disposal squad has been called at the site. The deceased and the injured were shifted to a nearby hospital.

Speaking to the media, DIG East Muqaddas Haider, said initial information showed the van was headed to the institute after leaving the hostel.

"The explosion took place at the van's right side at the [institute's] entrance. We are still establishing what type of explosion it was," Haider said, confirming that four people had been killed.

A spokesperson for the university confirmed that three of the victims were Chinese nationals.

Two of the injured have been identified as Chinese national Wang Yuqing and a guard named Hamid. Meanwhile, three people are said to be in critical condition, per sources.

Sindh Chief Minister (CM) Murad Ali Shah took notice of the incident and directed the Deputy Commissioner (DC) East and SP East to reach the spot of the blast immediately.

He also directed to shift the injured to the Dow University Hospital. He directed officials to ensure all facilities prevent any casualties.

The Sindh CM also asked for a detailed report of the blast from Commissioner Karachi commissioner.

Prime Minister Shehbaz Sharif has strongly condemned van blast inside the University of Karachi and expressed grief over the loss of precious human lives in the incident and prayed early recovery for the injured.

The prime minister expressed grief over the death of two women, including Chinese nationals and a driver. He assured the Sindh Chief Minister of all possible cooperation to eliminate the menace of terrorism from Pakistani society

Syed Murad Ali Shah apprised the prime minister about initial detail of the blast at the campus.

PM Shehbaz Sharif directed to provide the best medical facilities to the injured.

In a statement, the PPP chairman expressed sorrow over the loss of precious lives in the blast and expressed condolences on behalf of the Pakistani people to the Chinese people.

In a statment, Bilawal Bhutto said that he is sure that Sindh police will soon reach the cause of the incident, the beasts involved in the incident will also be caught by law soon and steps should be taken to ensure the safety of Chinese citizens.

He directed the Sindh government to investigate the bomb blast and bring the culprits to book.

He also sent his condolences to the bereaved family members of the deceased. The former premier demanded the Sindh government provide adequate facilities to the injured.

Later in the day, the Foreign Office (FO) issued a statement condemning the "reprehensible terrorist attack".

In a statement, FO spokesperson Asim Iftikhar said the government and the people of Pakistan extend their deepest condolences and sympathies to the families of the victims.

"The law enforcement agencies are investigating the incident to apprehend the culprits and bring them to justice. Local authorities are also providing all possible assistance to the injured," he said.

The FO spokesperson termed the incident a "direct attack on the Pakistan-China friendship and ongoing cooperation".

Calling the two countries "close friends" and "iron brothers", he said Pakistan attached great importance to the safety and security of Chinese nationals, projects and institutions in the country.