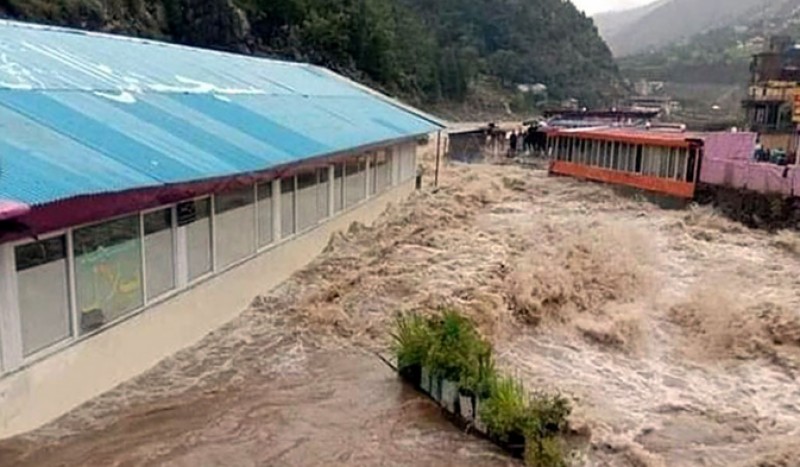 Mingora (Web Desk): The Khyber Pakhtunkhwa (KP) government has declared rain emergency in various districts of the province including Swat after the devastation caused by heavy floods in the district reached out of control after the record rains.

The decision has been taken on the recommendation of the National Disaster Management Authority (NDMA).

According to a notification issued by the provincial government's relief department, the state of emergency will be in effect until August 30 for relief efforts in flood-affected areas of Swat.

Meanwhile, KP Chief Minister (CM) Mahmood Khan has directed the Provincial Disaster Management Authority (PDMA) to expedite relief activities in the area besides timely provision of grocery, cooked food and other items to the affectees.

According to the district administration, communication bridges in Matta, Sukhra, and Lalko in Swat have also been damaged.

A number of hotels and restaurants have been submerged on the Mingora Bypass, and Swat Mingora Bypass Road has been closed for traffic due to inundation.

In Nowshera, meanwhile, public and private schools have been closed for two days due to flooding, the deputy commissioner said.

In Kalam, a new hotel has been completely destroyed due to the rain and flash floods.

In a flood advisory issued on Friday, KP’s Provincial Emergency Operations Centre said that water flows in River Swat at Khawazakhela point and its tributaries/nullahs had reached high to very high flood levels — 227,899 cusecs — which “may result in a dangerous situation for communities living nearby”.

The deputy commissioners of Swat, Lower Dir, Malakand, Mohmand, Charsadda, Mardan, Nowshera and Peshawar have been instructed to "immediately identify vulnerable points and communities at risk to devise mitigation and safety measures".

“Maintain enhanced alert level and monitor the developing situation to reduce reaction and response times,” the centre said, calling for the sensitisation of people living on the banks of the rivers about the increase in water flows.

“Make announcements for timely evacuation of the at-risk population from low-lying/flood-prone areas as per evacuation plans,” it added.

The PDMA also instructed authorities to evacuate cattle from areas at risk of flooding, as well as restrict vehicle movement there.

Moreover, the federal government has also declared an emergency in the flood-hit areas as the death toll from monsoon rains and flash floods has surged to 937.