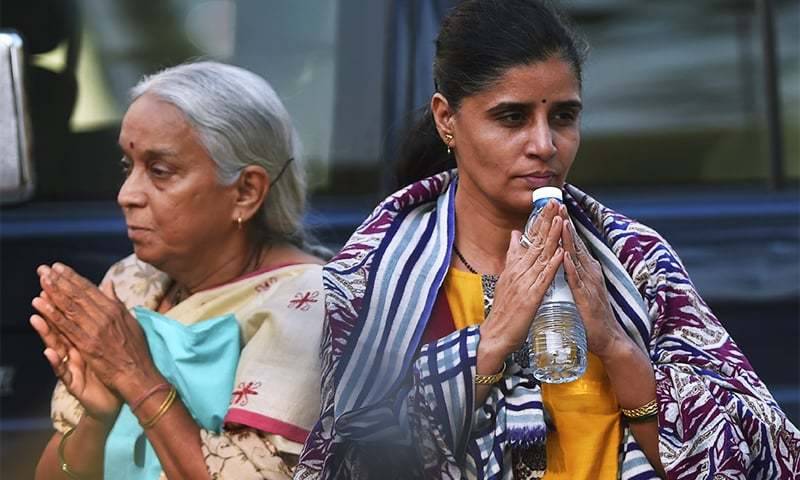 New Delhi, India (Web Desk): Kulbhushan Jadhav's wife and mother met Foreign Minister Sushma Swaraj in New Delhi on Tuesday a day after they met the convicted Indian spy in Islamabad 21 months after he was arrested by Pakistan on charges of espionage, Indian media reported.

Earlier, Jadhav's wife and mother remained silent bombarded with questions by journalists regarding their meeting with Jadhav, arranged at Pakistan Foreign Office on Monday.

According to Indian media, both wife and mother of Indian spy Kulbhushan Jadhav did not answer any question from media persons upon their arrival in India.

An Indian Navy commander and agent of the RAW, Jadhav , was arrested in a raid near the Pak-Afghan border town of Chaman in March 2016 and was later sentenced to death by a military court followed by a confirmation by army chief Gen Qamar Javed Bajwa.

After Jadhav’s arrest the bilateral dialogue process between Islamabad and New Delhi was suspended. Jadhav , in a video confession circulated shortly after his arrest, admitted to carrying out subversive activities inside Pakistan for India’s premier intelligence agency. India had sought consular access to Jadhav , however, Pakistan refused its request.

According to Pakistan, India is using covert means to foment violence in the country with an aim to undermine the multibillion dollar ‘One Belt, One Road’ initiative of China. The recent surge in terrorist attacks in the country has once again brought the India intelligence agencies’ role in backing the terrorism in Pakistan to the spotlight.

Pakistan security officials claim that RAW was using certain militant outfits operating out of Afghanistan to carryout terrorist attacks in the country. The current Indian National Security Adviser Ajit Doval is considered to be the architect of this policy called ‘offensive defensive’ that advocates a policy of supporting proxies to create trouble inside Pakistan.

On April 10, a Field General Court Martial — under the Pakistan Army Act, 1952, and Official Secrets Act, 1923 — awarded death sentence to Jadhav for espionage and sabotage.

Jadhav has since been on the death row.