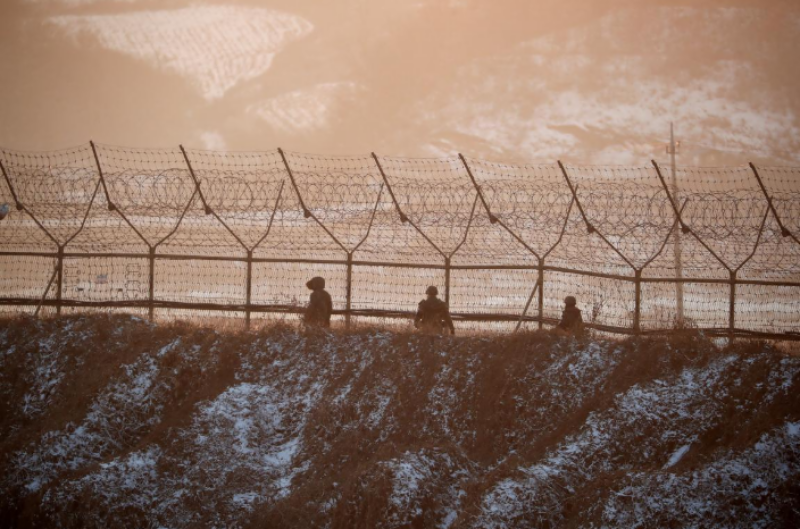 Seoul (Reuters): South Korea predicted on Tuesday that North Korea would look to open negotiations with the United States next year in an optimistic outlook for 2018, even as Seoul set up a specialized military team to confront nuclear threats from the North.

“North Korea will seek negotiation with United States, while continuing to pursue its effort to be recognized as a de facto nuclear-possessing country,” South Korea’s Unification Ministry said in a report, without offering any reasons for its conclusion.

The Ministry of Defence said it would assign four units to operate under a new official overseeing North Korea policy, aimed to “deter and respond to North Korea’s nuclear and missile threat”.

Tensions have risen over North Korea’s nuclear and missile programs, which it pursues in defiance of years of U.N. Security Council resolutions, with bellicose rhetoric coming from both Pyongyang and the White House.

U.S. diplomats have made clear they are seeking a diplomatic solution but President Donald Trump has derided talks as useless and said Pyongyang must commit to giving up its nuclear weapons before any talks can begin.

In a statement carried by the official KCNA news agency, North Korea said the United States was terrified by its nuclear force and was getting “more and more frenzied in the moves to impose the harshest-ever sanctions and pressure on our country”.

China, the North’s lone major ally, and Russia both supported the latest U.N. sanctions, which seek to limit the North’s access to refined petroleum products and crude oil and its earnings from workers abroad, while on Monday Chinese Foreign Ministry spokeswoman Hua Chunying called for all countries to ease tension.

China, the main source of North Korea’s fuel, did not export any gasoline, jet fuel, diesel or fuel oil to its neighbor last month, data from the General Administration of Customs showed.

In its 2018 forecast, South Korea’s Unification Ministry said it believed the North would eventually find ways to blunt the effects of the sanctions.

“Countermeasures will be orchestrated to deal with the effects, including cuts in trade volume and foreign currency inflow, lack of supplies, and reduced production in each part of the economy,” the report said.

The latest round of sanctions was prompted by the Nov. 29 test of what North Korea said was an intercontinental ballistic missile that put the U.S. mainland within range of its nuclear weapons.

The Joongang Ilbo Daily newspaper, citing an unnamed South Korean government official, reported on Tuesday that North Korea could also be preparing to launch a satellite into space.

Experts have said such launches are likely aimed at further developing the North’s ballistic missile technology, and as such would be prohibited under U.N. resolutions.

The North Korean Rodong Sinmun newspaper said on Monday saying that “peaceful space development is a legitimate right of a sovereign state”.

North Korea regularly threatens to destroy South Korea, the United States and Japan, and says its weapons are necessary to counter U.S. aggression.

The United States stations 28,500 troops in the South, a legacy of the 1950-53 Korean War, and regularly carries out military exercises with the South, which the North sees as preparations for invasion.

US to announce new sanctions against North Korea as South prepares ...