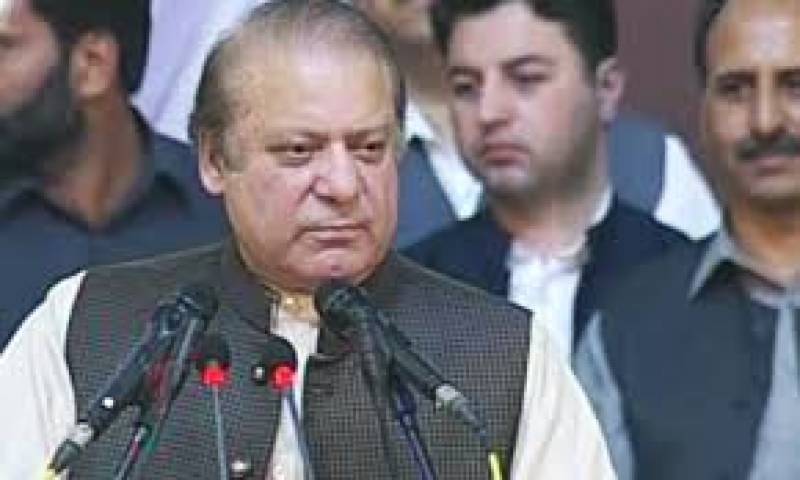 Sharif said, “PML-N will have a historic win in the elections.”

Pointing out the development work undertaken during his government, Nawaz said he delivered on his promises. “In 2013 I had promised to eliminate load shedding and that commitment was fulfilled.”

He said to those in attendance "We eliminated terrorism over the past four years, with the grace of Allah. Cricket returned to Lahore."

However, the progress of Pakistan has come to a standstill ever since the Panama Papers decision, Nawaz lamented.

The former premier lamented that Pervez Musharraf broke the Constitution but his case is still pending in the courts, yet "they gave the verdict against us in a matter of weeks."

Nawaz Sharif said, "We cannot go back now. We will only go forward. The youth will take Pakistan forward. Nobody can stop you except God."

The PML-N leader said although Pakistan has been independent since its creation in 1947, its founder Quaid-e-Azam's dream is yet to be realized to the full.

"Your future should be better than your past and present."

The former prime minister also questioned his disqualification by the Supreme Court. "Where have you heard that a leader is disqualified because he did not receive a salary from his son?" Nawaz asked.

In an apparent reference to Imran Khan, Nawaz said, “A ladla (dear) is excused despite admitting to his crime.”

Nawaz added that throughout the world people had the right to elect a government, but this was not the case in Pakistan. “Pakistan is a country where the offshore companies of some are halal and others haram.”

“Till today they could not even prove Rs10 worth of corruption.”

He further said that these are the circumstances which are destroying the country.

“This is a matter of the Constitution and law’s supremacy,” said the PML-N chief.

Nawaz added that he had previously run a campaign for the supremacy of the judiciary in 2009 and is not against the institution. "Those who refer to me as a coward, are the ones who went and hid in Rawalpindi when the time came for fighting for the judiciary's supremacy."

Criticizing Imran further, Nawaz said the PTI chairman loses elections and then searches for ways to bring down an elected government and its prime minister.

"Imran will be clean bold during the 2018 elections. You will not be able to win the elections," claimed Nawaz.

"The time has come now to raise the flag for the supremacy of justice. Our history shows that all those dictators which came to power, were legitimised by the courts."

Referring to his GT road rally, the PML-N chief said the people promised him that they would stand for the sanctity of the ballot and he was hopeful to see the youth promising the same during the convention.

Former premier Nawaz Sharif’s passport will not be renewed: Rashid