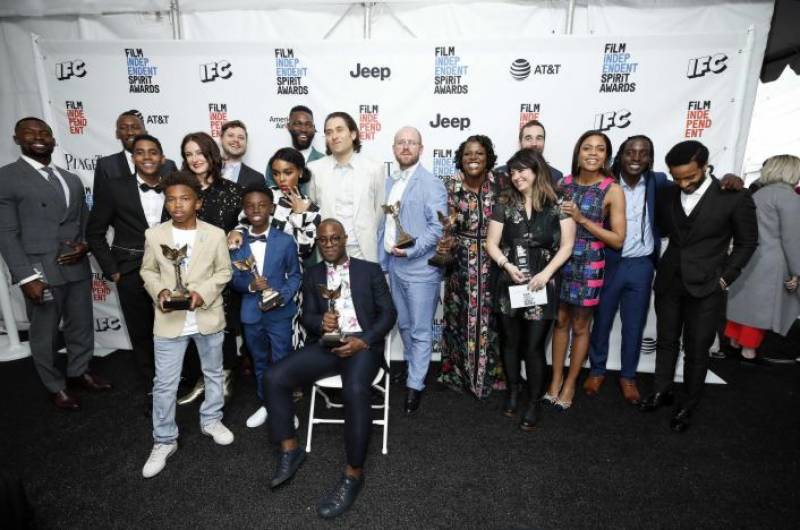 "Moonlight," about a black boy in an impoverished Miami neighborhood as he grapples with his sexuality, was named best feature, the top award. It also won for best director and best screenplay for writer-director Barry Jenkins, and an ensemble cast award. "This movie exists as a beacon of inclusivity," Jenkins said. "Moonlight" will be competing for eight Oscars, including best picture.

The Independent Spirit Awards, held on California's Santa Monica Beach on the day before Hollywood's glitzy Oscars ceremony, honor the year's best achievements in independent film made on small budgets. The last three winners of the Spirit Awards - "Spotlight", "Birdman" and "12 Years a Slave" - all went on to win the best picture Oscar, the highest honor in the movie industry.

But this year, some of the films getting the most awards buzz, like "La La Land," "Lion" and "Hidden Figures," were not eligible for Spirit Awards. Hosted by comedians Nick Kroll and John Mulaney, Saturday's show was a light-hearted affair but that didn't stop stars from taking some jabs at the administration of U.S. President Donald Trump. Casey Affleck, who won for his lead role as a grieving janitor in "Manchester by the Sea," used his acceptance speech to say "the policies of this administration are abhorrent and they won't last."

French star Isabelle Huppert was named best actress for playing a woman who pursues her rapist in "Elle."

"I've made so many independent films and I think it's independence that makes art win," Huppert said. "O.J.: Made in America," a look at the 1995 murder trial of former U.S. football star O.J. Simpson, won best documentary over Ava DuVernay's "13th" and Raoul Peck's "I Am Not Your Negro." All three are also Oscar-nominated.

Other winners included supporting actor Ben Foster for "Hell or High Water," and Molly Shannon for her supporting role in "Other People." Coming-of-age tale "American Honey" went home empty-handed despite getting six nominations.