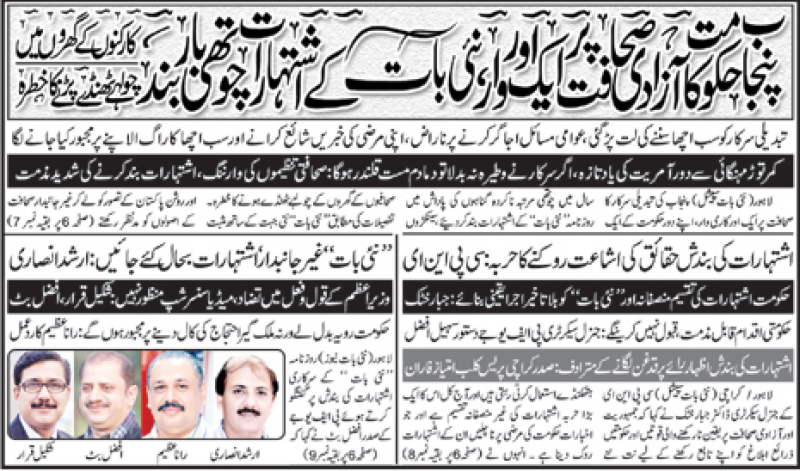 This is for the fourth time that the provincial government of Pakistan Tehreek-e-Insaf (PTI) has imposed the ban on advertisement for 'Daily Nai Baat'.

It has been observed that the Punjab government is penalizing the esteemed newspaper because the provincial government is not happy over the independent views expressed in the newspaper over the present state of governance, and economy.

However, the newspaper is pursuing the policy of impartial journalism.

The Punjab government’s step is being seen as a move against freedom of expression and economic exploitation of the workers associated with the 'Nai Baat media group'.

The major media organisations have strongly condemned the use of government advertising as a lever to force the media to act as per their dictation, which is tantamount to a significant and undesirable curb on the freedom of press.

This is not austerity, this is BLACKMAIL.

Government cuts down adverts selectively for media outlets who believe in staying impartial. In the new wave of censorship, the government has cut down all advertisements for Daily Nai Baat.#Censorship #FreeSpeech #MediaFreedom #NaiBaat pic.twitter.com/GQt4NwzPPu

They noted that such actions aimed to strangulate the dissenting voices, and were unconstitutional as well as a gross violation of democratic norms.

The organisations have demanded to immediately lift the ban on government advertising to Daily Nai Baat.