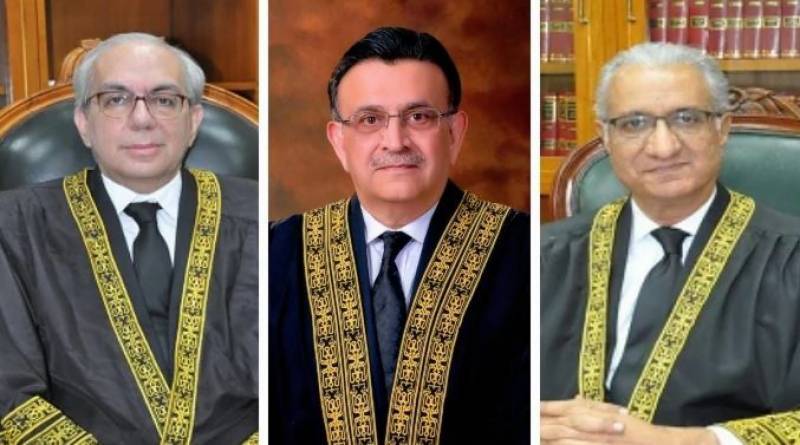 Pakistan Muslim League-Quaid (PML-Q) leader Chaudhry Pervez Elahi had filed a  petition against Mazari’s decision of July 22 in the re-election of the provincial chief minister which led to Hamza Shehbaz’s victory.

During the election, Mazari had decided against counting the votes of 10 PML-Q lawmakers, which were cast in Elahi’s favour, citing a letter written by party President Chaudhry Shujaat Hussain in which he had instructed them to vote for Hamza instead.

In its verdict, the court said is no legal justification for the Deputy Speaker's ruling.

The bench also ordered that Punjab Governor Baligh ur Rehman administer the oath to Elahi at 11:30pm.

It added if the governor refuses to perform his duties then President Arif Alvi will administer the oath.

The SC bench also declared appointments made by Hamza Shahbaz and the oath administered to the Punjab cabinet "illegal".

The court said that its orders should be implemented at once, and directed that copies of the verdict should be sent to Punjab governor, chief secretary and deputy speaker.

Earlier in the day, the SC reserved its verdict on Parvez Elahi’s petition challenging the deputy speaker’s ruling.

On Monday, the ruling coalition had said it would boycott the proceedings in protest.

During the today's hearing, the CJP remarked that the bench had not been provided with even one legal argument in favour of constituting a full bench during yesterday’s hearing. “You asked for time which is why the hearing was adjourned,” he told Naek.

"Remain in the court and watch the proceedings. The legal question has not been answered yet," he added.

"There is no need for further arguments in this case. We will give priority to wrapping up this case as soon as possible," he said.

The chief justice said lawyers for all sides had been given time to present their arguments. The Supreme Court had dismissed the caretaker cabinet in 1988, the CJP continued, adding that the chief executive was the head of the cabinet.

Giving his arguments in the case, Parvez Elahi’s lawyer said that the petitions against the 21st Amendment were dismissed by a ratio of 13:4 in a full court.

However, many judges gave different reasons for dismissing the petitions, he added.

Zafar told the court that the constitution mentions that the parliamentary party will give directions to the lawmakers about voting.

At this, the CJP questioned whether the party head and parliamentary party were two separate entities.

Elahi's lawyer said that they were two separate entities.

"The parliamentary party is informed about the party's decision, and based on that, it takes a decision."

During the proceedings, Justice Ahsan questioned: “Where has the word parliamentary leader been used?”

The PML-Q counsel replied that the world “parliamentary party” is used in the Political Parties Order 2002.

In the 18th and 21st Amendment cases, only the provisions of Article 63 were looked at, Justice Ijazul Ahsan said.

“Regarding Article 63A, the case of the party leader was not observed in detail in the past”, he added.

A judge repeatedly changing his opinion is not a good example, Chief Justice Bandial said.

“There should be uniformity in the judge's opinion. I change my opinion only when there is a good reason," the CJ stated.

Additional Attorney General Aamir Rehman then came to the rostrum to make a “few submissions” before the court. Justice Akhtar questioned if the federal government had separated from the decision of the ruling coalition?

“I will assist the court under Article 27(A)”, Rehman said. Let there be no mistake in judgment, the chief justice said, adding that everyone was welcome to support the court.

PTI counsel Imtiaz Siddiqui stated that the instructions of the party chief should come in time and that the deputy speaker had said that he received Chaudhry Shujaat’s letter.

Chaudhry Shujaat's lawyer, however, said that the letter was sent to the party members. To which the chief justice asked if the letter was read out at the parliamentary party meeting before the vote?

Former advocate general of Punjab Ahmed Owais came to the rostrum and said that "the issue of Punjab chief minister was under discussion for three months", the PTI lawyer said, highlighting that all members of the PML-Q knew who to vote for.

Barrister Ali Zafar stated that action against deviant members under Article 63A would be taken by the party leader and that the party chief would send declarations against dissidents.

Chief Justice Bandial said that the defence had claimed that the party chief controlled the parliamentary party.

“There is no question of the party chief's control over the party. All powers within the party rest with the leader,” Ali Zafar said.

The powers of the party chief should not be reduced, the barrister said, maintaining that Article 63 gave the parliamentary party power to instruct the members.

It is clear that if a member does not vote according to the conscience of the party policy, then he should resign and come back again, Justice Ijazul Ahsan stated.

Barrister Ali Zafar said that the question of defection also came up in the Ayesha Gulalai case, to which the chief justice asked if the Gulalai case had mentioned who would give guidance.

“In the Ayesha Gulalai case, there was a matter of nominating members for various positions”, Ali Zafar said, adding that it was declared that the party leader or his nominated representative could send the disqualification reference.

Justice Ahsan pointed out that the verdict in the Ayesha Gulalai case went against Zafar’s client.

“The Ayesha Gulalai case did go against my client but was according to the Constitution”, the lawyer said.

The defence has referred to the decision against the defecting members, the Chief Justice maintained, to which Zafar said that the decisions of the ECP were not mentioned in the ruling of the deputy speaker.

“Powers are transferred through the party head. There is no doubt that the party leader has an important role”, Chief Justice Umar Ata Bandial said. “However, the instructions for voting are issued by the parliamentary party head,” he added.

Ali Zafar claimed that the deputy speaker did not give the ruling according to the decision of the ECP because he was not bound by the electoral watchdog’s decision.

The chief justice maintained that the decision of the Election Commission was also referred to in the court yesterday, and questioned which law dictated that the apex court was bound by the decisions of the ECP.

“No law binds the Supreme Court to the decision of the Election Commission”, Ali Zafar said.

Justice Ahsan questioned how many disaffected members had participated in the by-election? Faisal Chaudhry stated that out of the 20 dissidents, 16 contested as PML-N, and two contested independent elections. He furthered that of the 18 who contested the elections, 17 were defeated.

The chief justice instructed Faisal Chaudhry to speak at the rostrum next.

Justice Ahsan maintained that according to the defence, instructions were given by party head Imran Khan in the case of defecting members. He stated that the defence said that if the ECP’s decision was annulled, 25 members would be reinstated.

“The defence side says that if the appeal is approved, Hamza's votes would be 197”, he added.

Barrister Ali Zafar argued that the decision of the High Court had come regarding the election of the chief minister and that the ECP’s decision was a past and closed transaction.

“On July 1, the Supreme Court gave a unanimous decision on the election of the chief minister”, he further said.

Justice Ahsan maintained that the by-election agreed to by the court should be allowed and that it was also assured that a run-off election would be conducted based on the results of the by-election.

One killed, more than dozen injured in twin blasts in Jerusalem

Ali Zafar then stated that PML-N leader Hamza Shehbaz had given a statement in the Supreme Court and that he had not objected to the by-election. He questioned how they could have objections about the by-elections now. “Hamza said that a run-off election was approved based on the results of the by-election”, Zafar said.

Chief Justice Bandial maintained that the matter of the interpretation of Article 63A had been settled and that there is no need for a further explanation.

SC seeks record from Centre, provinces of transfers/postings in police

“The advocate general of Punjab has also tried to interpret Article 63A and while he made a good effort, his interpretation is incorrect”, he said.

Additional Attorney General Aamir Rehman and advocate Azhar Siddique then came to the rostrum. When asked who Azhar Siddique represented, he stated that they were all together.

Justice Ahsan said that Barrister Ali Zafar had given very detailed arguments and told him to have a seat.

The CJ replied that the attorney general was abroad and that they could not wait for him.

“I am seeking permission to submit the reports”, Aamir Rehman said, following which he submitted them.

Chief Justice Bandial thanked Rehman for his comments. Rehman stated that the court had said it was necessary to obey the instructions of the party chief, to which Justice Ahsan replied that the deputy speaker did not refer to this court decision in the ruling.

"According to Article 63(A), it is necessary to give power to the parliamentary party.

The additional attorney general argued that according to the SC decision of 2015, the party leader can give instructions. He argued that the decision of the Supreme Court must be implemented until it is revised.

"It is not mandatory to implement every decision of the Supreme Court", stated Justice Akhtar, adding that Rehman’s argument was strange and that there was no question of voting in this case.

Earlier, the bench resumed the hearing after the apex court rejected the coalition government’s request for the formation of a full court to hear  the petition.

PPP leader Farooq Naek also appeared on the rostrum and stated that his party would also not appear in court.

On July 22, the Punjab Assembly deputy speaker had dismissed Pakistan Muslim League-Quaid's (PML-Q) 10 votes after party head Chaudhry Shujaat asked them to vote in favour of Hamza, but they did not follow his instructions.

At the previous hearing on July 23, the court had allowed Hamza to remain "trustee" chief minister till Monday.