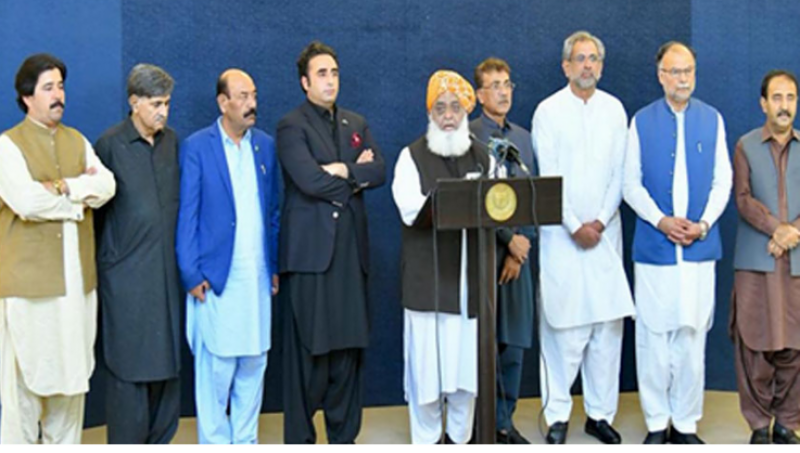 Islamabad (Web Desk): The coalition partners of the government have announced to boycott Supreme Court’s (SC) proceedings in case pertaining to the re-election of Punjab chief minister.

Addressing a press conference in Islamabad on Monday night alongside the other coalition partners, Jamiat Ulema-e-Islam-Fazl (JUI-F) chief and head of Pakistan Democratic Movement (PDM) Maulana Fazlur Rehman said any verdict announced by the three-judge bench hearing the case would be considered partial. Rejecting the apex court’s refusal to a full court, he said the government would not appear before this bench.

“The government wants no interference in its affairs and seeks a continuation of its policies for which it will also suggest parliament legislate to ensure respect to the people and judiciary’s verdicts.”

Speaking on the occasion, Federal Minister for Foreign Affairs and PPP Co-Chairman Bilawal Bhutto-Zardari said that when a decision is being taken about an institution, the entire bench should hear the case.

Pakistan Muslim League-Nawaz (PML-N) senior vice president Shahid Khaqan Abbasi said the case at hand would be a test for the SC. “Justice demands that if a question has been raised over a bench or judge, they should recuse themselves. This is supremacy of the law. It is for this bench to decide how their conduct will go down in history.”

Earlier, the bench rejected the coalition government's plea to constitute a full court to hear the matter pertaining to election of Punjab CM.

Announcing the judgment, the top court asked for more arguments and legal clarity regarding the coalition government's plea for formation of a full bench.

CJP Umar Ata Bandial remarked that the court needed more clarity to decide about the formation of full court.

CJP Bandial maintained that a full court had been formed in the past in a matter of utmost importance and added that the full bench could be formed in complex issues.

Meanwhile, Punjab Chief Minister Hamza Shahbaz Sharif has filed a separate petition, seeking formation of a full court bench in a case against his election, a demand which had also been reiterated by leaders of government's coalition parties in press conference in Islamabad on Monday.