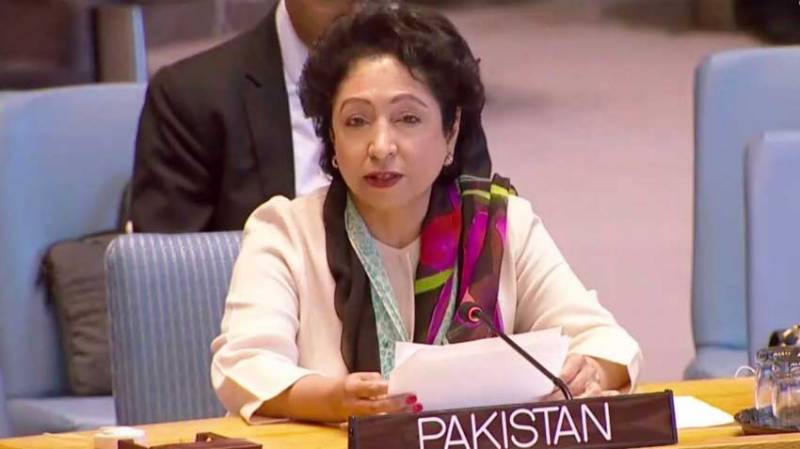 Speaking at a conference held in New York, Permanent Representative of Pakistan at the UN Maleeha Lodhi said Pakistan reaffirms its dedication to the Palestinian cause at the 2019 pledging conference.

She said Pakistan backed the UN chief's call and would make a voluntary contribution to the United Nations Relief and Works Agency for Palestine (UNRWA).

Pakistan has announced a commitment of financial support to UN agency that assists #Palestinian refugees.

Permanent Representative of Pakistan at the United Nations, Maleeha Lodhi said #Pakistan reaffirms its dedication to the Palestinian cause at the 2019 pledging conference. pic.twitter.com/N9wSSbXf43

Maleeha Lodhi expressed hope that the new dawn of Palestinian statehood will emerge sooner when Palestinian refugees can finally return to their homes.

She also recalled that at the recent Organisation of Islamic Cooperation (OIC) summit in Makkah, Prime Minister Imran Khan had reaffirmed Pakistan’s steadfast support to the Palestinian cause, including the establishment of a two-state solution with Al-Quds Al-Sharif as its capital.

Earlier, speaking to the opening session of the pledging conference, UN Secretary-General Antonio Guterres said he was humbly asking all donors to maintain their support for UNRWA at last year’s level.

“We know what is at risk: education for a half million children; 8 million health care visits a year; emergency relief for 1.5 million. In Gaza alone, one million Palestine refugees depend on UNRWA for food,” he said.

In 2018, UNRWA relied on extra money from member states and internal savings to cover a US $446 million budgetary gap. This year it unveiled a budget of US $1.2 billion, unchanged from last year.

UNRWA, founded in 1949, runs schools and provides health care for some five million Palestinian refugees in Jordan, Lebanon, Syria, the West Bank, and the Gaza Strip.