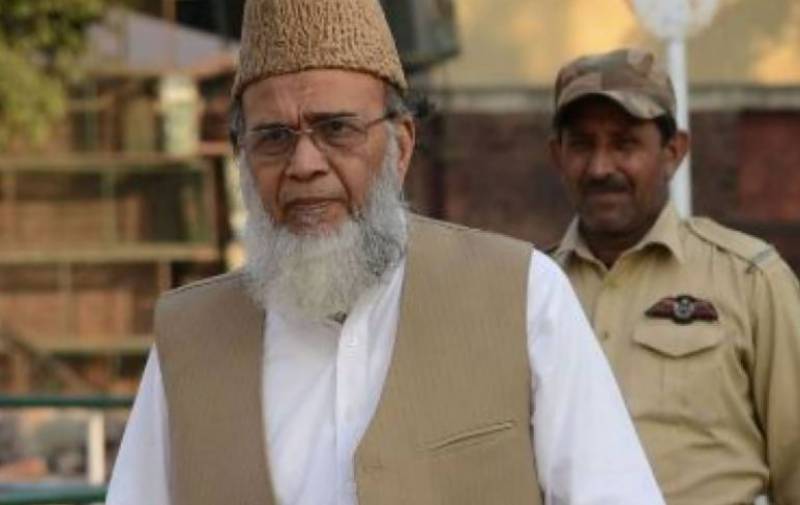 According to details, 78-years old Syed Munawar Hassan was admitted to a local hospital in Karachi for medical assistance and later shifted to an intensive care unit (ICU) after his condition deteriorated.

Syed Munawar Hassan was born in Delhi in August 1941. Soon after partition, his family migrated to Pakistan.

The former JI chief received his early education from Jacob Line after which did his Masters in Sociology and Islamic Studies from Karachi University in 1963 and 1966 with distinction.

Syed Munawar Hassan began his political career at the National Students Federation (NSF) and became the president of the federation in 1959.

He joined the Islami Jamiat-e-Talaba (IJT) in June 1960 and went on to become its president in 1963.

Syed Munawar Hassan was the fourth Ameer of Jamat-e-Islami. He was elected as Ameer in 2009 and was replaced by current Ameer Siraj-ul-Haq during party elections in 2014.

President Dr Arif Alvi has expressed deep grief and sorrow over the sad demise of former Jamaat-e-Islami Ameer Syed Munawar Hassan. He prayed for the departed soul and commiserated with the bereaved family.

Meanwhile, politicians, journalists and others took to social media to express their grief at Hasan's passing.

Leader of the Opposition in the National Assembly and Pakistan Muslim League –Nawaz (PML-N) President Shehbaz Sharif offered his condolences to the deceased's family and to party workers.

Pakistan Peoples Party (PPP) Chairman Bilawal Bhutto expressed deep grief and sorrow over the sad demise of the fomer JI chief and offered his condolences to the family of the deceased.

Jamiat Ulema-e-Islam-Fazl (JUI-F) chief Maulana Fazlur Rehman also offered his condolences. "I spent a lot of time with Syed Munawar Hasan. He was a man with a happy disposition. He made valuable contributions to politics," he said.

Minister for Information and Broadcasting Shibli Faraz also expressed deep grief and sorrow over the sad demise of former ameer of JI.

In a tweet, he said Syed Munawar Hasan became a powerful voice for the rights of Muslims around the world.

Shibli Syed Munawar Hassan was a very sophisticated person and supporter of democracy.

The information minister prayed for the departed soul and commiserated with the bereaved family.