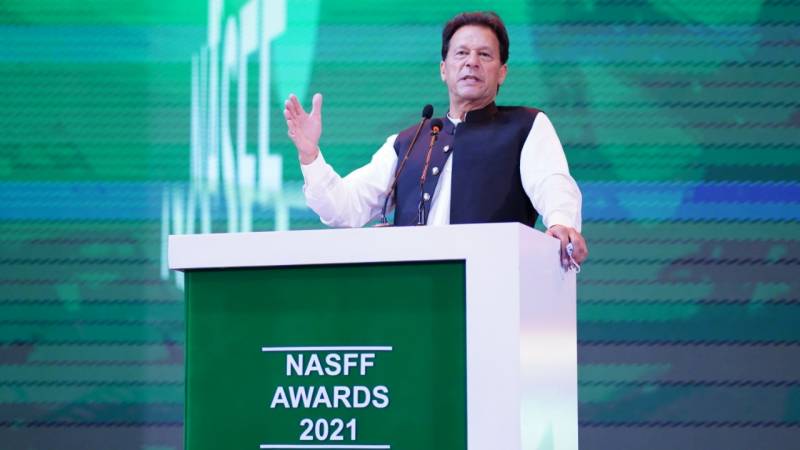 Islamabad (Web Desk): Prime Minister Imran Khan on Saturday said that “Pakistaniat” should be promoted if people wish to promote soft image of the country across the globe.

Addressing the National Amateur Short Film Festival (NASFF) Awards Ceremony in Islamabad, the premier said that scholarships will be given to young film makers to portray the real soft image of the country.

PM Imran said the world does not acknowledge copied material and we should promote our own cultural values and new ideas.

"I have seen the inception of Pakistan's film industry but we started copying Indian films" after some years, the PM said regretfully.

The prime minister said Pakistan began adopting foreign cultures instead of promoting its own through the films. "Bring original ideas and don't be afraid of failure," he told budding filmmakers.

Talking about the religious tourism potential, Imran Khan said world in new millenium has acknowledged our effort of Kartarpur corridor.

He said Pakistan has twelve climatic zones which mean it can produce everything and can export to the whole world.

Speaking on the occasion, Federal Minister for Information and Broadcasting Fawad Chaudhry said that Pakistan's first media technology university would be inaugurated in August.

“Under the prime minister's leadership, state-run media would be digitised on August 14, including Pakistan Television making the switch to hi-definition,” the minister said.

He said that other initiatives were in the works to help Pakistani cinema such as the approval of a film policy and a new film school in Karachi.

The information minister said the modern world was based on opinions and narratives for which media was a very important tool for states.

Earlier, addressing the ceremony, Director General Inter-Services Public Relations (ISPR) Major General Babar Iftikhar said it is high time for Pakistan to improve its perception on the global level as we have almost won the war against terror.

"We need to align this perception with Pakistan's reality, which is extremely beautiful and magnificent," the DG remarked.

He said that Allah Almighty has blessed Pakistan with every blessing there is, and by making films via NASFF, is a positive image of the country.

The DG ISPR said the festival was a platform which would not only showcase Pakistan's positive image to the world but also "encourage the youth and give new talent to Pakistan's media industry".

Major General Babar Iftikhar said that the first 15 winners would be sent on scholarship to the University of California for a one-year training course on advanced filmmaking.