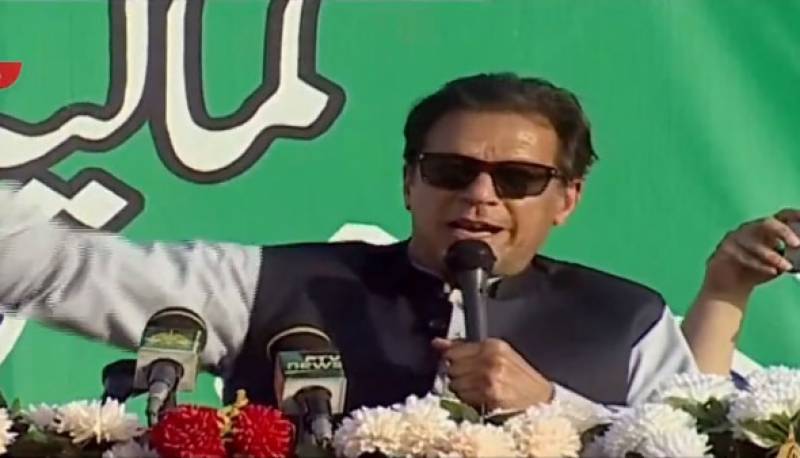 Kamalia (Web Desk): Prime Minister Imran Khan on Saturday said that the 'only objective' behind Opposition's no-trust motion against him was to blackmail his government for NRO.

Addressing a public gathering in Kamalia, the premier said that the Opposition wanted to come into power and close "all of their corruption cases" and dismantle the National Accountability Bureau (NAB).

The prime minister said that the three stooges (a reference he coined for the corruption-tainted leaders of the main opposition parties) had been hatching a conspiracy to pull down the government of Imran Khan since they had not been getting any NRO.

He appealed to all Pakistanis to reach Islamabad for the March 27 public gathering as the opposition was giving millions of rupees to the Members of the National Assembly (MNAs) to switch sides.

“It is the obligation for the whole nation to stand against evil and side with the good and support those people who have been waging war against these thieves and plunderers,” he told the gathering amidst thunderous applause of the supporters who were waving PTI’s flags and chanting party slogans.

The prime minister termed March 27, a ‘decisive day in the country’s history as the mammoth crowd would gather in the Capital on his call to give a message to those criminals that the days of their plunder and loot were over.

The biggest thieves had been plundering the country for the last thirty years, he said, adding one politician known as ‘diesel’ had been doing politics on the basis of religion while the other ‘biggest illness of the country, Zardari’, had been facing graft cases over his billions of rupees corruption and in the fake accounts cases.

Turning his guns at Pakistan Muslim League-Nawaz (PML-N) supremo Nawaz Sharif, the premier said that he was staying in London and would return as soon as the government was pulled down through unfair means.

PM Imran said that after his return to Pakistan, Nawaz would bribe the media, influence the Election Commission of Pakistan (ECP) and would attack and divide the judiciary, as the corrupt elements could not tolerate an independent judiciary, which was also evident from PML-N track record of its past attack on the Supreme Court.

Next, Nawaz Sharif, would target Pakistan army, as he had always developed differences with the previous army chiefs, because, they were aware of his plunder, the prime minister predicted, adding that Sharif met Modi secretly as if there was a romance between them.

Burkha Dutt, an Indian writer, had informed in her book that Nawaz did all this due to his fears from his corruption.

The Dawn leaks was also a failed attempt by the former prime minister to blame the army, he added.

PM Imran said that in the Memogate scandal, former ambassador to the US Hussain Haqqani pleaded the US administration to save Zardari.

The prime minister observed that unless a nation failed to differentiate between good and evil it was destined to be destroyed as pronounced by Molana Rumi.

"Pakistan will certainly flourish by following the teaching of Islam and maintaining justice, equality and rule of law in the society," he said.

PM Imran said that Pakistan is moving towards the goal of development, progress and prosperity and the government has introduced many others welfare projects to uplift of the masses.