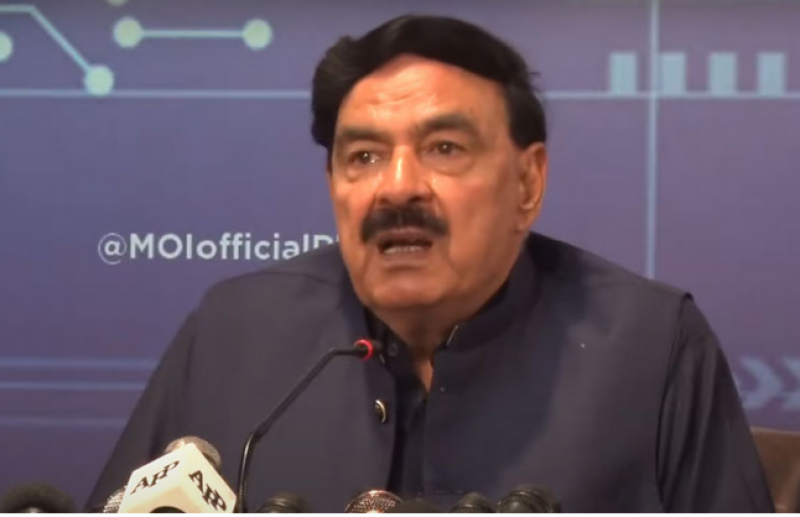 Addressing a press conference in Islamabad, He said that his ministry would cooperate with opposition parties in connection with their upcoming rallies as well as the no-confidence vote.

He, however, warned nobody would be allowed to block another party's route.

"It is a very important day in Pakistan's democratic history which is why everybody should display responsibility. The interior ministry is open 24/7 and we will try [to ensure that] the law and order situation is maintained. God forbid, if the opposition makes a mistake, they will pay for it."

"No party has been granted permission to hold a sit-in, he said," assuring that all opposition members would be provided protection.

Sheikh Rashid said that the onus of bringing the required number of opposition lawmakers to the National Assembly was on the opposition.

He said that the dissident members were "enjoying at five-star hotels and they would be provided security in accordance with the Islamabad High Court's instructions.

"The interior ministry could also summon the army under Article 245 of the Constitution after approval from the prime minister and the federal cabinet," Sheikh Rashid said.

Answering a question about Pakistan Peoples Party (PPP) MNA Jam Abdul Karim, who is nominated in a murder case in Sindh, the interior minister said that he will be arrested upon arrival from Dubai.

"According to the law, the PPP “should have sought bail from the court,” Sheikh Rashid said, adding that the suspect is brought here ahead of the voting on the no-trust and he will be arrested at the airport as they have no order from the court regarding his bail.

“I have directed Federal Investigation Agency (FIA) and Sindh police IG to arrest PPP MNA Jam Abdul Karim from the airport,” he said.

Responding to another question, Sheikh Rashid Ahmad said that his comments regarding early elections were ‘solely his’, adding that he advised PM Imran Khan to move towards national elections after presenting the poverty budget.