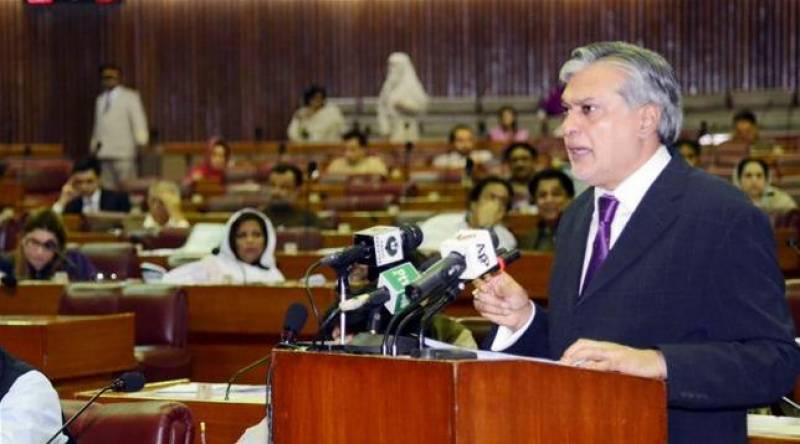 “This is the fifth budget being presented by the PML-N government, and this is an achievement for democracy,” the finance minister said in his opening remarks.

The provincial share in federal taxes is estimated at 2,384.2 billion rupees, which is 11.6 percent higher than the budget estimates of the outgoing fiscal year, Radio Pakistan reported.

The Minister announced ten percent increase in pensions. Minimum wages have been increased from the existing fourteen thousand to fifteen thousand rupees per month.

Batman allowance and Hardlying Pay for Pakistan Navy and different allowance of Pakistan Post have also been increased.

Personnel of frontier constabulary will get a fixed monthly allowance of eight thousand rupees irrespective of their deployment in any part of the country. The finance minister said the government will bear an additional burden of 125 billion rupees because of relief to government employees.

The finance minister announced launching of a new national saving scheme for the welfare of family members of martyrs.

Under this scheme, heirs of martyrs of Pakistan Army, police and other security institutions will get an extra amount. The budget of Pakistan Bait-ul-Maal will be increased from the existing 4 to 6 billion rupees.

He announced revival of the scheme launched by PML (N) government in 1999 envisaging payment of all dues of HBFC mortgage by the widows. The limit of loan for this scheme has been increased from three hundred thousand to five hundred thousand rupees.

He said a one billion dollar non-convertible bond will be issued to attract investment by overseas Pakistanis in the country's infrastructure. The Finance Minister said all pending refunds of sales tax will be paid in two phases. Those involving one million rupee will be cleared by 15th of July and others by 14th of August this year.

Ishaq Dar also announced relief measures relating to sales tax and federal excise duty for different sectors of economy. These include elimination of additional tax on lubricant oil by marketing companies, reduction in sales tax rates on import of hybrid electric vehicles at par with locally manufactured vehicles, automatic stay in cases related to federal excise duty till decision of appeal and elimination of withholding tax on supplies between registered individuals.

The Finance Minister said that sales tax rate has been reduced from seventeen to seven percent on different types of machinery used in poultry sector.

Sales tax rate on multimedia projectors for use in educational institutions would be reduced from the existing seventeen to ten percent.

He said that there will be no custom duty for import of new and five year old harvesters to facilitate farmers.

The Minister also announced relief in custom duty for several items for some pharma and bio technology sectors. Regulatory duty on import of aluminium waste scrap, used in auto parts, fans and pottery is being reduced from the existing ten to five percent. Customs duty on import of raw material for baby diapers is being reduced from 16 to 11 per cent.

Customs duty of 11 per cent and 16 per cent imposed on telecommunication equipment are being abolished and replaced with a uniformed nine percent regulatory duty. The finance minister said rate of withholding tax for non-filers will be increased on contracts, sales, and services, payments to nonresidents, rental income, prize bonds, lottery, commission, auction, gas bills for CNG stations and sales by industrialists and importers to distributors, dealers, and wholesalers.

However, the existing rates for filers will continue without any change.

The rate of withholding tax on dealers, distributors and wholesalers on electronic goods is being increased from the existing 0.5 percent to one percent.

Vehicles purchased under Prime Minister Youth Loan Scheme would be exempted from the withholding tax.

Federal Budget proposes total development outlay of 2.5 trillion rupees for the next financial year, highest in the history of the country.

Federal development spending has been estimated at 1,001 billion rupee, which is twenty-five percent higher than the current financial year.

Higher Education Commission will get 35 billion rupees, social sector 135 billion rupees and special measures have been proposed for the growth of IT sector during the next financial year.

Infrastructure gets priority in the new budget with huge allocations of 414 billion rupees, including 320 billion rupees for National Highway Authority.

The new budget envisages GDP growth rate of six percent for the next financial year as against 5.28 per cent during outgoing year.

The Finance Minister said allocation for BISP is being enhanced to one hundred and twenty one billion rupees as against forty billion rupees in 2013.

The Finance Minister said federal excise duty on cement is proposed to be increased from one rupee per kilogram to one rupee and twenty five paisa per kilogram.

Sales tax on commercial imports of cloth is being increased to six percent to provide a healthy competitive environment for the local industry.

On steel sector, the existing rate of electricity is being increased from nine rupee per unit to ten point five rupee per unit. The Finance Minister said it is the first time in the country's history that a sitting Prime Minister and the Finance Minister are presenting their fifth fiscal budget. He said this reflects that the democracy has taken roots in the country and the entire nation can be proud of it.

Highlighting the performance of different sectors over the last four years, the Finance Minister said that the GDP growth witnessed growth of five point two eight per cent during the outgoing fiscal year, which is the highest in ten years while the fiscal deficit has reduced to four point two per cent from over eight per cent in 2013.

He said that foreign exchange reserves are at stable position while revenue collection has been enhanced by eighty one percent over the last four years. Loans granted to the private sector for development purpose has increased by five times.

The Finance Minister said during the current fiscal year, import of machinery saw an increase of over forty per cent while gas supplies to the industries also improved. He said that zero load shedding has been ensured in the industries while outages for domestic sector has also decreased significantly. He was confident that that the outages will be eliminated by next year.

He said per capita income has gone up from 1334 dollars to 1629 dollars during the last four years, showing 22 per cent increase.

FBR receipts stood at just 1940 billion rupees in 2012-13 which are targeted to reach 3521 billion rupees this year, which shows 81 per cent increase in four years.

The Minister said imports during first ten months of the current financial year stood at 37.8 billion dollars. He said increase in imports is due to 40 percent increase in import of machinery and industrial raw material, increase in petroleum products prices and CPEC related projects.

He said exports in first ten months decreased by 7.8 per cent as against same period last year.

The house will now meet on Monday at four pm.