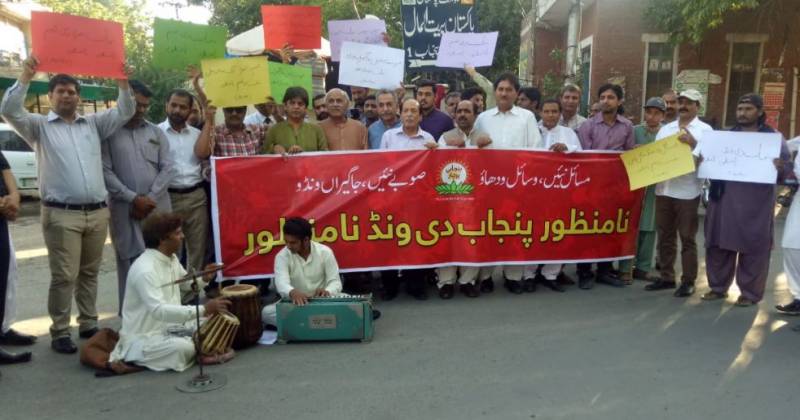 Lahore (PR): Activists under the banner of Punjabi Parchar staged a protest against the planned partition of Pakistan's most populous province, Punjab.

Speaking on the occasion, Punjabi Parchar President Ahmed Raza contended that few political forces were engaged in a failed bid for political leverage, invoking the issue of partition on administrative lines.

“Punjab is still better as compared to other provinces as far as the administration is concerned. It is a conspiracy to vouch for partition instead of equal distribution of resources which would have consequences across the country,” said Raza and added that people from across the province would take to the street against this conspiracy.

Leader of Pakistan Punjabi Literary Board, Mushtaq Sufi shared that efforts were underway to partition the language of Punjab; however, he warned that such a bid would be staved off. He urged the government to increase the resources instead of problems and take steps for progress at the local level.

“Punjab is a centre of civilization and neither its identity nor its geography would be allowed to be altered,” he vowed.

Moreover, senior Punjabi Poet Baba Najmi told the gathering that partitioning Punjab was tantamount to tarnishing the nationalistic identity which 'would not be permitted. “If Sindh, Khyber Pakhtunkhwa and Balochistan are revered as holy lands by the inhabitants, why not Punjab,” Baba Najmi wondered and added that the province was like a motherland which would not be permitted to be partitioned.

Furthermore, Professor Jameel Paul expressed that the issues behind the proposal to partition Punjab were evident in other provinces as well. He wondered whether administrative problems existed in Punjab only, calling for devolution of resources.

Professor Paul also rejected the reason carved out of the geographical distance between Lahore and south Punjab as a basis for partition, questioning the distance between Ghotki and Karachi.