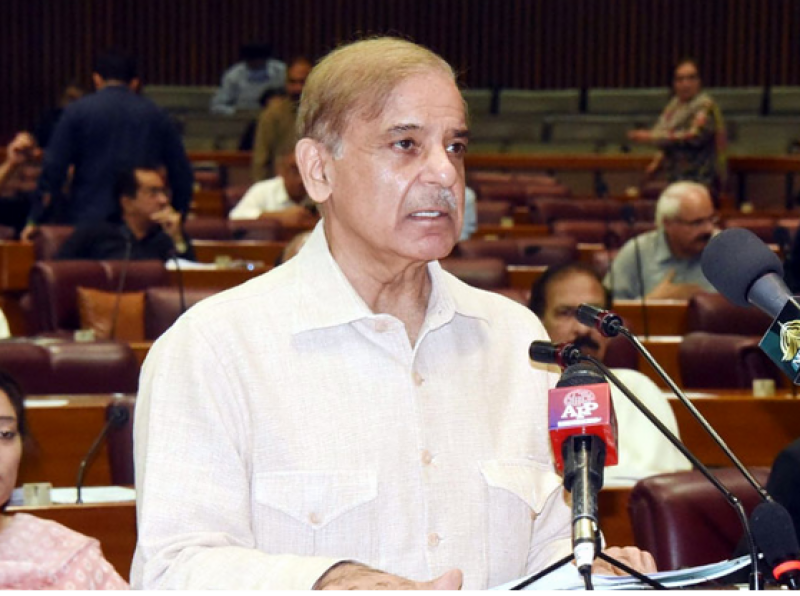 Islamabad (Web Desk): Prime Minister Shehbaz Sharif on Thursday vowed not to bow before the dictations of Pakistan Tehreek-e-Insaf (PTI) Chairman Imran Khan and made it clear that the National Assembly, not anyone else, will decide the timing  to hold next general elections.

Addressing the National Assembly, the premier while slamming the PTI chief, said, " I want to make it clear to the head of this gang that none of his dictation will be accepted. This House will decide when to hold fair election."

PM Shehbaz said if the PTI was merely concerned about the election, they should have come to the parliament.

"Imran Niazi should not have any misunderstanding. There are 14 months regarding completion of parliament's term. We are open to talks. Dialogue is the trait of politicians. I can constitute a committee. But, if you think you will pressurise, blackmail or threaten us to leave the government, keep in mind, we will not bow before your pressure or dictation," Shehbaz said.

He accepted that the country was faced with numerous challenges but the coalition government would try its utmost to steer the country out of the issues it had inherited from the previous government.

Lamenting the riots and destruction caused by the participants of the PTI long march, the prime minister said the House should choose between the course of development or destruction.

He said the protestors who also carried weapons to bring to the federal capital, also damaged infrastructure here and burnt down the trees despite the party claiming to be the champion of 10 Billion Tree Tsunami.

PM Shehbaz also condemned the killing of a police constable in Lahore, sympathized with the grieved family and also announced an assistance package for the policemen who were martyred or injured in the line of their duty.

He said instead of showing some compassion to the widow or orphaned children of the martyred police constable, the PTI leader taunted him.

The premier told the House that the law enforcement agencies showed maximum restraint to control the situation only by using teargas or rubber bullet. The government also called in the army troops to aid the civilian setup, he added.

He also lauded the performance of the Islamabad Police, Rangers, FC, Islamabad Traffic Police and other departments concerned to protect the lives and properties of the people.

"PTI long march, which was led by Imran Khan from Peshawar and accompanied by KPK chief minister, was in fact an attack at the federation which could not be allowed in any civilised society," PM Shehbaz said.

The prime minister said after the nation sacrificed thousands of lives and left many others disabled, the slogan of jihad was raised in Peshawar by the PTI.

"Today, the slogans of jihad were raised in Peshawar. Jihad against whom? The nation needs an answer. They used the religion for personal gains which the House should condemn through a resolution to avert the recurrence of such incidents," he commented.

He said despite the dearth of resources, the previous government reduced the oil prices, leaving behind a "landmine" for the incumbent government.

The prime minister said during the last three and half years, the PTI leadership did nothing to support the poor, closed PKLI, and ended free medical treatment of hepatitis patients.

"Does it require any more evidence to believe that he is an enemy of Pakistan," he remarked.

The prime minister also questioned the PTI leader as to why he announced a long march on May 25 despite knowing that it coincided with the sentencing of Kashmiri leader Yasin Malik by an Indian court.

PM Shehbaz said the House was unanimous to condemn the sentence to Yasin Malik and shared the grief of his family, besides reiterating Pakistan’s stance to continue supporting the people of Kashmir for their right to self-determination.

He recalled the PTI’s sit-in of 2014 when the institutions including Pakistan Television was attacked and caused the postponement of Chinese President Xi Jinping which also delayed the signing of the China Pakistan Economic Corridor for seven months.

PM Shehbaz said Chinese firm executing Karot Hydropower project had agreed to provide free electricity to the national grid till the finalization of the Commercial Operations Date which would save Rs4 billion to the national kitty.

He said the previous government wasted three and half years in mere attacking the national institutions including the judiciary and hurling allegations ignoring the sufferings of the people.

"How long this drama will continue? How long this disturbed nation will tolerate it," he questioned adding the country could not afford the history of the 2014 sit-in to be repeated.