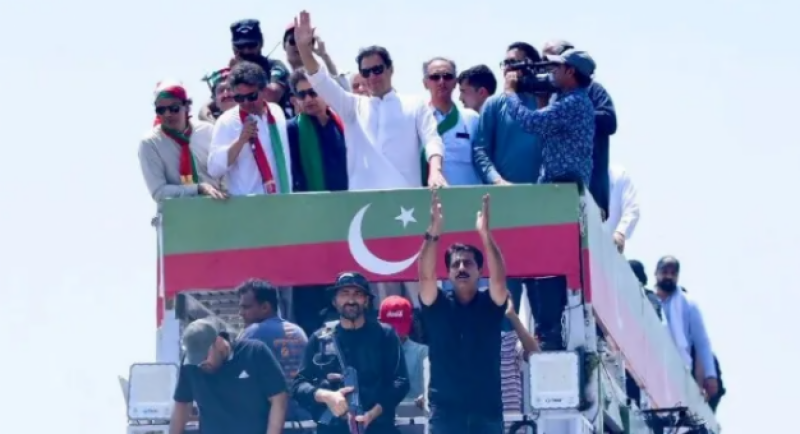 "I had decided that I will sit here until the government dissolves assemblies and announces elections, but of what I have seen in the past 24 hours, they (govt) are taking the nation towards anarchy," he said, claiming that the government was also trying to create a divide between the nation and police.

Imran said the government would be happy if he staged a sit-in in Islamabad as it would lead to clashes between the people and police and the army.

Imran Khan said three PTI workers lost their lives in Karachi, while two workers were thrown off Ravi Bridge and thousands others were arrested.

Referring to the judgment passed by the Supreme Court, the PTI chief said that his ;peaceful protests' could not be legally hindered by the federal government. Empowered, Imran stated that he would gather two million people in the federal capital for his cause.

The former premier, along with other party leaders, had reached Islamabad in the early hours of Thursday after PTI workers and supporters also made their way towards the federal capital, pushing aside containers and braving tear gas shelling.

As Khan's caravan made its way to the famous D-Chowk after entering Islamabad, the federal government called in the Pakistan Army for the security of the capital's Red Zone.

The decision was taken for the protection of important government buildings, including the Supreme Court of Pakistan, Parliament House, Presidency, Prime Minister Office and others.

The situation in the twin cities began to return to normal. With PTI workers leaving Islamabad’s Blue Area in convoys, the lack of transport caused problems for them.

The administration and police began removing obstacles to re-open the Murree Road and other highways.

According to reports, party workers severely damaged property in the Blue Area, setting fire to trees and burning telephone wires. The protest also resulted in pollution of the environment as garbage, including food waste was left scattered.

Departments, including the Capital Development Authority, have begun the rehabilitation work.

As per the spokesperson of Islamabad Police also reported that the party works had entered the Red Zone after Imran gave a six-day deadline to the government.

"Police, Rangers and other law enforcement agencies stopped them with great restraint," the spokesperson said.

Imran Khan had earlier arrived at the Wali Interchange in Khyber Pakhtunkhwa (KP) by helicopter and from there he shifted at container to lead his convoy towards Islamabad.

Speaking to charged party supporters in Swabi, he told his supporters that they will go to Islamabad's D-Chowk and "no one can stop us".

He said media persons shouldn't be stopped and routes heading towards hospitals should remain open.

In a statement, the interior minister said that the government will not tolerate terrorism in the guise of politics as police seized a huge cache of weapons from the residence of PTI leader in the provincial capital of Punjab ahead of their long march.

Meanwhile, clashes between police and PTI supporters were reported in different cities from where the protesters tried to join the long march towards Islamabad.

The protesters torched a police van and removed all the hurdles created by the law enforcement agencies.

The police resorted to aerial firing and teargas shelling to disperse the protesters. However, the PTI workers responded by throwing stones at the law enforcers.

In Lahore, the PTI workers started gathering at the Batti Chowk after announcement by the party's  Lahore chapter that the 'Azadi March' will be started from this point.

The police officials and protesters clashed at the intersection when attempts were made to remove the barriers.

PTI supporters and the police also clashed at the Kamalpur Interchange in Faisalabad. The marchers, however, advanced after breaking through the wall of the Faisalabad Development Authority (FDA).

The police office also tried to stop the party workers near the motorway after which a scuffle broke out between both groups.

A three-member bench of the apex court headed by Justice Ijaz-ul-Ahsan announced the verdict today, on a petition filed by Islamabad High Court Bar Association.

The court ordered the PTI to avoid any chaos, damage to state property and inconvenience to the people.

At the order of the apex court, negotiating teams of government and PTI have also been formed that will hold first meeting tonight at Commissioner Office, Islamabad.

The SC earlier today ordered the Islamabad chief commissioner to provide an alternate site to the PTI for holding its Azadi March and issue a traffic plan for the protesters.